Among the Ruins by Ausma Zehanat Khan 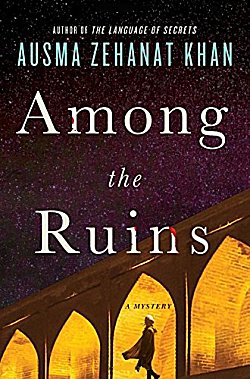 First Line: Esfahan is half the world.

Esa Khattak is on much-needed leave from Canada's Community Policing department, connecting to his cultural heritage on a trip to Iran. He is finding peace within the country's beautiful mosques and gardens, but a Canadian government official cuts that short. Now he is expected to look into the death of a renowned Canadian-Iranian filmmaker, Zahra Sobhani, who was murdered in Iran's notorious Evin prison where she'd been seeking the release of a well-known political prisoner.

In no time at all, Khattak finds himself under surveillance and embroiled in Iranian politics, but when the trail he's following leads back to Zahra's family in Canada, he needs the help of his partner, Detective Rachel Getty.

Getty uncovers a conspiracy linked to the Shah of Iran and the decades-old murders of a group of Iran's most famous dissidents, and it is she who realizes that Zahra's murder may not have been a political crime at all.

Ausma Zehanat Khan's series continues its strong characterizations, intricate plots, and fine storytelling. As Esa Khattak finds it increasingly difficult to sidestep the people in Iran who are keeping him under surveillance, and as I learned more about Iran's turbulent history and the fate of its political prisoners, I was struck forcefully by one thing: the powerful sense of entitlement I was born with and so seldom fully realize that I have. Millions of people around the world will never know the freedom of what it's like to be white and American. Don't get me wrong: I do not believe that everyone needs to be white and American, but everyone does deserve to live under the seemingly inviolable umbrella of protection that I was. Moreover, people like me need to be strongly reminded by books like Among the Ruins of just how lucky we are.

This book isn't a mere tale of political injustice in another country, however, although the occasional chapter told from the point of view of an unidentified political prisoner brings that into painful focus. No, we get to see how good a team Khattak and Getty are when they are forced to work thousands of miles apart-- and it is fun to watch Getty put the clues together from the information Khattak manages to sneak out of the country.

There is also a heightened sense of tension as Khattak is being followed by people who wouldn't bat an eye if they killed him-- and this says nothing about the effects of torture on those who must physically endure it as well as on their loved ones who work for their release. The mystery takes on more twists and turns: the Shah of Iran, the legendary crown jewels of Iran, smuggling, historic letters... Among the Ruins is often a feast for the eye and a feast for the mind of the armchair sleuth (as well as giving a cautious note of hope for Iran's future). I certainly look forward to the next book in this series!