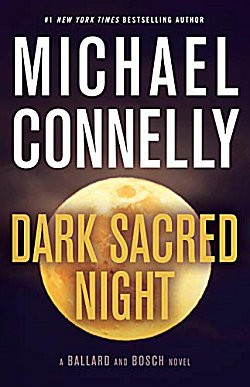 Detective Renée Ballard's partner is on bereavement leave, and since no one on the late show (night shift) is replaced, she's working alone. During the wee hours one morning, she returns to Hollywood Station to find a stranger rifling through the old file cabinets. The intruder is Harry Bosch who's working a cold case that's gotten under his skin.

Ballard won't let him go through the department records, but after Bosch leaves, she takes a look at the case herself and feels an instant, empathetic connection to it. She wants in. Now Ballard and Bosch are working together to find out what happened to Daisy Clayton, a teenage runaway who was brutally murdered and thrown away like a piece of trash. During the course of their investigation, they form a fragile trust which is going to be tested when the case takes an unexpected-- and dangerous-- turn.

I loved Connelly's first Renée Ballard novel, The Late Show, and had no doubt that she and Harry Bosch would get along well after a bit of introductory posturing (mostly on Renée's part). After all, Ballard is a younger, female version of Bosch. All she needs is his experience, and if the two of them work together very much, she's going to get it.

It's fun watching these two get to know each other. Bosch takes one look at Ballard's deep tan and knows she's not the typical detective who works the late show. He even makes Ballard laugh-- and it's so unusual for her to do that that it startled me. When Ballard is around Harry, she pays attention and soaks up how he does things like a sponge. Once again, as I read Dark Sacred Night, I loved watching how Renée sees things, how she interacts with people. There's no such thing as a throwaway human being to Renée or to Harry, so I predict some interesting cases ahead for the two of them to work.

Connelly's pacing is swift and sure. He knows how to deliver fascinating cases and action sequences that have readers biting their fingernails. Moreover, Connelly doesn't believe in throwaway characters either. Readers never see a police officer named Tim Farmer during the course of Dark Sacred Night even though he plays an important role. We only get to read his descriptions of people on his field interview cards, but outside of Ballard and Bosch, Farmer is the most memorable character in the book to me.

There's little else for me to say other than I hope it's not long before these two detectives are working together again. Renée, send up that signal!