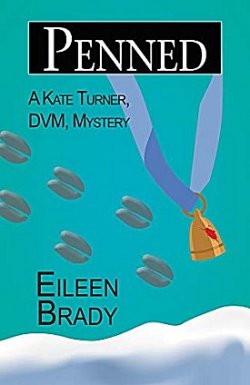 First Line: The killer envisioned the old woman lying in bed sleeping, a slight smile on her face.

Seven months into her one-year contract to cover for a Hudson Valley veterinarian who's cruising around the world, Kate Turner is celebrating Halloween in Oak Falls, New York when she bumps into Gloria LaGuardia. The octogenarian shows some signs of mental confusion, but she's still sharp. Kate is mildly alarmed when Gloria tells her, "Someone evil is here. I saw him."

Busy Kate puts the encounter at the back of her mind until she learns that Gloria has been murdered. She attends the elderly lady's funeral and crosses the path of aspiring true-crime novelist Tucker Weinstein. Weinstein believes that Gloria saw Carl Wolf that Halloween evening, a killer who's spent the past twenty-one years on the FBI's Most Wanted List.

Kate may be up to her eyeballs in feathered and furry patients, but she finds herself drawn to this mystery. Could a notorious killer really be living in sleepy little Oak Falls? And if he is... who is he?

I have to admit that I've been enjoying Eileen Brady's Kate Turner DVM series more for the anecdotal information about animals than for the mysteries, but that's all changed now with this fourth book, Penned. Something clicked into place and turned this book into a lean, mean Doberman of a mystery. (Don't worry, this particular Doberman still likes belly rubs and going for walkies.) There's only one thing about Penned that barked offkey, and that's the romantic triangle. Should Kate go for rich archaeologist Jeremy or for local lawman Luke? It's probably just me, but if there's one thing in a book that can have me rolling my eyes, it's the romantic triangle, and for that I can thank Janet Evanovich. (Stephanie Plum fans will know what I'm talking about even if they don't agree.)

Other than that, I really enjoyed this book. There's plenty for animal lovers to like. Brady's background in veterinary medicine means she's got plenty of tales to share-- both good, solid informational ones as well as ones that can make readers laugh. This is the part of Brady's novels that I've come to look forward to. What surprised and delighted me was that the author has successfully woven together elements of the cozy mystery with a serial killer thriller and turned it into a compelling detective story. It's not scary; there's no graphic violence, but readers are hooked into finding out Carl Wolf's identity. A canine clue shortly before the reveal made me realize the man's Oak Falls persona, but-- whew-- it was hard work.

Animal-loving mystery fans are going to find plenty to enjoy in Penned, and I know that I'm certainly looking forward to another visit with Kate Turner.