Murder by the Book by Lauren Elliott 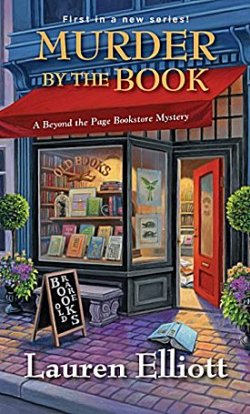 An unexpected inheritance meant that Addie Greyborne could leave some painful memories behind following the deaths of her fiancé and father. Now she's living in her great aunt's huge Victorian house in a small New England town where she's just opened a used and rare bookshop called Beyond the Page.

But the trouble begins on the very first day Addie's shop is open. The woman who owns the bakery next-door is decidedly hostile, a car nearly runs Addie down, one of her books is stolen, and her new friend who owns the shop on the other side of hers is arrested for killing another local merchant.

The police seem to think that the evidence proves Addie's friend is the killer, but Addie knows they don't have an open and shut case, and she's going to prove it.

Lauren Elliott's first Beyond the Page Bookstore mystery is a promising beginning. Addie Greyborne has been touched with altogether too much tragedy, but she's also been touched with an overdue sprinkling of fairy dust. The great-aunt she never knew was a rich woman, and now Addie can have her dream bookshop and live in an old Victorian house that's filled with first editions and other treasures that provide stock for her store. She's well-qualified to run such a business since she worked in the rare editions department of the Boston Public Library as well as the British Museum in London.

There is an excellent mystery in Murder by the Book: missing keys, Addie's shop and house being broken into, the local merchant being killed, secret panels, secret compartments, secret rooms... It was a pleasure to attempt to figure out what was going on. However, there are some annoying aspects to this book as well.

Murder by the Book tries to do too much for a first book in the series. The mystery is a complex one, and it is overshadowed by all the relationship building Addie does. She becomes immediate best friends with Serena, who owns the tea shop next-door. She hires a stranger off the street on her intuition alone, not even performing the most perfunctory background check. And then there's the budding romance with the local chief of police (who is also Serena's brother). This first book would have been improved if all this relationship stuff had been paired with a less complex mystery. This plot could then have followed in book two.

Other annoyances involve both writing and one particular character. In her writing, too many of Elliott's characters "huff," "puff," tap their toes or cross their arms across their chests and glare at someone. Not only did this make me want to hand everyone an asthma inhaler, I also felt as though I were reading about a group of reality TV divas. And then there's Martha, the crone in the bakery. Everyone tells Addie that Martha is always grumpy and never likes anyone. If she's always that hateful, how can she still be in business? No one ever says that her baking is ambrosia. Even her main complaint against Addie doesn't hold water. However-- if you ever need anyone to arm the villagers with pitchforks and flaming torches for a march on Frankenstein's castle, trust me, Martha is the perfect choice.

Even though Murder by the Book contains an excellent mystery and a likable main character, it is overshadowed by relationships and romance. Since I prefer my mysteries to focus on the mystery and not on the romance, I doubt that I'll continue with this series.