Go to My Grave by Catriona McPherson 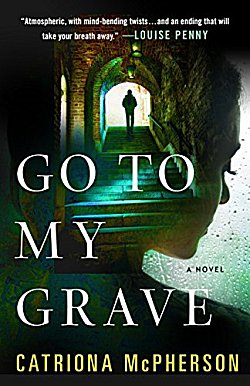 First Line: This is the story of three days last September when eight old friends gathered in a beautiful house by the sea.

Donna Weaver and her mother purchased an old house on a remote beach in Scotland, named it The Breakers, restored it, and turned it into a luxury bed and breakfast. They've put everything they have into the place, and it just has to be a success.

Donna is on hand to cook gourmet meals and to pick up after the very first group of guests, but this argumentative group of cousins soon realize that they've been to the house before. Over two decades have passed, but the night of a sixteenth birthday party still haunts them all-- it's the night one young girl drowned in the sea. The cousins all made a vow of silence, but now someone has broken the pact. Before the weekend is over, at least one of them will also die.

I've enjoyed other standalone novels by Catriona McPherson because she is skilled at heightening suspense and in creating characters that grab my interest. She's got plenty of suspense here in Go to My Grave, and the character of Donna Weaver certainly grabbed my interest. So, too, did the element of running a bed and breakfast on a beach in Scotland because I've enjoyed stays in more than one place like that.

The story is compelling, told in two timelines. One, in 1991, in the voice of a teenage girl invited to that fateful birthday party, and the other in the voice of Donna, the co-owner of The Breakers, in the present day. Both voices are forceful, making readers want to keep turning the pages. Both voices make readers want to know what really happened at that birthday party and who is responsible for what is happening at The Breakers now.

Unfortunately, I deduced what was going on almost immediately, and I came close to skipping to the end to find out if I was right because this group of cousins is nothing more than a pack of entitled, self-indulgent pillocks who've never taken responsibility for their actions in their entire lives. At one point, I closed the book and thought-- very loudly-- "Would someone stick a knife in that man!" because one of them is obnoxious beyond belief.

But you know what? Donna's voice kept me reading until the very end, and although this isn't one of my finest reading experiences this year, I'm glad I finished it. I will admit that, if the next book I pick up has a similar cast of characters, I won't finish reading it!