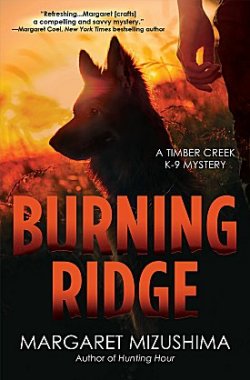 First Line: If Deputy Mattie Cobb had eaten supper at home with her K-9 partner, Robo, she wouldn't have noticed the rig parked illegally across the street from the Main Street Diner.

When a charred body is found in a shallow grave up on Redstone Ridge, Deputy Mattie Cobb and her K-9 partner, Robo, are called in to lead the investigation. As the pair continue to gather evidence in the mountainous terrain, more gruesome discoveries are made, but none will shock Mattie as much as when the first body is identified.

Then the killer begins playing a deadly cat and mouse game with Mattie. She could very well be the next victim on the killer's list, but there are two who will fight to the last to make sure that doesn't happen: Robo and veterinarian Cole Walker.

Margaret Mizushima's Burning Ridge is the fourth book in her Timber Creek K-9 mystery series, a series which relies on good strong mysteries (most of which take place in the glorious Colorado outdoors), the relationships between the characters, and exciting scenes that put readers right in the middle of the action. A theme throughout the series has been Mattie coming to terms with her difficult past, and Burning Ridge brings this theme to fruition. Not only does Mattie have to deal with her past, she also has to come to the realization that she now has people around her who truly care about her, people whom she can trust. It's how Mattie deals with these emotional questions that adds so much to this book (and the entire series).

After the last book, Hunting Hour, I was hopeful that Mizushima would steer clear of any further child jeopardy, and I'm happy to report that she did. She still delivers a tightly woven, exciting mystery that takes place in the mountains of Colorado. Every time Mattie had to saddle up a horse to head up to remote Redstone Ridge, I was reminded of some of my own trail rides. Mizushima can pull you right out into the great outdoors, which is something I enjoy. In many respects, I'm reminded of Nevada Barr's Anna Pigeon series, so if you're missing Anna as much as I am, I'd like to recommend the Timber Creek K-9 series. Good characters, good setting, good mysteries. Good stuff!