The Scribe of Siena by Melodie Winawer 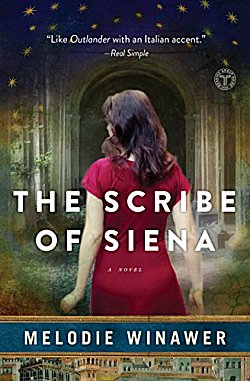 First Line: The problem with being a neurosurgeon is that when the telephone rings, you have to answer it.

Neurosurgeon Beatrice Trovato's deep empathy for her patients has exhausted her. When her beloved brother passes away, she finds herself traveling to Siena, Italy, to settle his estate. Now she not only needs to rest, she also needs to grieve.

As Beatrice begins going through her brother's papers, she finds evidence of a 700-year-old conspiracy to bring ruin to Siena. She uncovers the journal and paintings of fourteenth-century artist Gabriele Accorsi, and when she finds a startling image of her own face in one of his paintings, she is suddenly transported to the year 1347 in a Siena that's soon to be decimated by the Plague. She meets Accorsi, and the longer she knows him and the more she learns about the city, she finds herself falling in love with both. But Siena has a deadly and inevitable date, and Beatrice is going to have to decide in which century she belongs.

I have soft spots in my heart for well-written books about time travel and the Plague. I know they're rather odd topics, but there you are. It's been a long time since I've read a serious time travel novel, and when I heard about Melodie Winawer's The Scribe of Siena, I knew I wanted to read it. Although I did find a couple of minor problems with it, I did enjoy being transported back to medieval Tuscany.

Through watching how Beatrice is with her patients, readers can immediately like her and care what happens to her. That feeling is further cemented when Winawer tells us of the wonderful relationship she had with her brother.  And when she suddenly finds herself in Siena, she doesn't blend seamlessly into the woodwork. No, she gets in trouble for the way she's dressed (she doesn't have the right undergarments for the dress she stole from some poor woman's laundry basket). But she does get a break or two so she can scout around and try to figure out how to get back to the right time period.

Winawer brings medieval Siena to life while she roused my interest in a couple of things. Why was Siena so much harder hit by the Plague than all the other cities in Italy? Was there really an inter-city rivalry between Siena and Florence? That's one of the best things about well-written time travel books: they can jumpstart your curiosity and have you learning all sorts of things.

Earlier, I mentioned finding a couple of problems with The Scribe of Siena. One was that I thought the storyline could've used a slightly larger injection of the Plague to increase tension and suspense. The second was that the book seemed to run out of gas in the last hundred pages. However, this is a debut novel and an extremely enjoyable one at that. Melodie Winawer is an author to watch.