Slowly We Die by Emelie Schepp 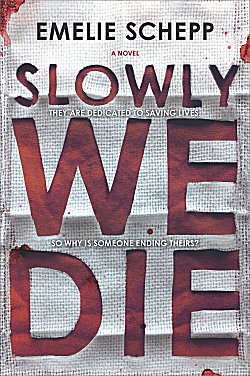 First Line: The woman opened her eyes and looked straight up at me.

A patient is damaged for life after a tragic incident on the operating table, leading a young surgeon to leave the profession. Now, years later, a scalpel is the instrument of choice in a series of senseless murders within the medical community.

Special prosecutor Jana Berzelius is in charge of the investigation. She and her team must find out who is preying on these victims and why. What she can't know until she is finally closing in on the killer is how her own mother's recent death is connected to the investigation.

For a long time, I was the sort of reader who had to start reading each series in strict numerical order. If I had trouble getting my hands on the first book in a series, it could be years before I began reading it, but that's what I did. Now that I have more years in my rearview mirror than I have out on the road in front of me, I've been bypassing this rule of mine from time to time. There are several writers who are adept at giving you just enough background on their characters in each book that you can jump in anywhere and don't feel lost. If you discover that you love the series, you can go back and read all those missed books. Or not. You have that choice. But there are some writers who are not skilled at doing this.

Emelie Schepp is one of the writers whose series you should read in order if you want to feel a connection with her characters. Slowly We Die is the third book in the Jana Berzelius series, and although I could admire the pacing and plotting of the novel, I could never warm to the characters. Since I am a character-driven reader, I was at a disadvantage throughout the book, so keep that in mind. If the story is more important to you as a reader, you shouldn't have a problem reading and enjoying Slowly We Die. However, if the characters are your focus, you just might. Sometimes deviating from my rule backfires. Oh well.