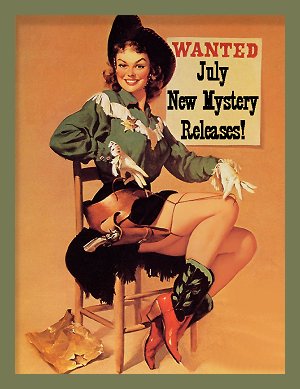 I hope your summer is going as well as mine is. My month-long anniversary celebration is almost over. Thank you so much to everyone who has participated in the giveaways and to those of you who sent me emails. Since I don't do this for monetary gain, a little feedback is always icing on my cake.

I've also been reading some excellent books, and you'll be reading my reviews, but-- you know me-- I'm always on the lookout for something to read. Here are my picks from the new crime fiction being released throughout the month of July. I have them grouped according to release dates, and the covers and synopses are courtesy of Amazon.

Did I pick anything that tickles your fancy? Let's find out right now! 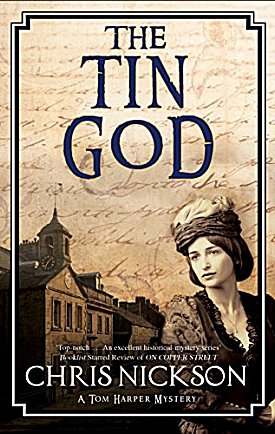 Synopsis: "Leeds, England. October 1897. Superintendent Harper is proud of his wife Annabelle. She’s one of seven women selected to stand for election as a Poor Law Guardian. But even as the campaign begins, Annabelle and the other female candidates start to receive anonymous letters from someone who believes a woman’s place lies firmly in the home.

The threats escalate into outright violence when an explosion rips through the church hall where Annabelle is due to hold a meeting – with fatal consequences. The only piece of evidence Harper has is a scrap of paper left at the scene containing a fragment from an old folk song. But what is its significance?

As polling day approaches and the attacks increase in menace and intensity, Harper knows he’s in a race against time to uncover the culprit before more deaths follow. With the lives of his wife and daughter at risk, the political becomes cruelly personal …" 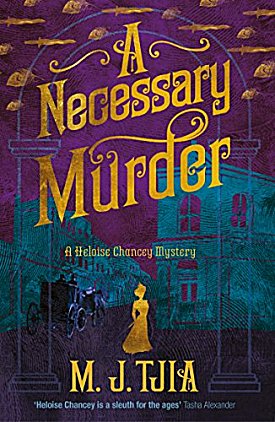 A few days later, a man is cut down in a similar manner on the doorstep of courtesan and professional detective Heloise Chancey's prestigious address. At the same time, Heloise's maid, Amah Li Leen, must confront events from her past that appear to have erupted into the present day.

Once again Heloise is caught up in a maelstrom of murder and deceit that threatens to reach into the very heart of her existence.

In this second installment of the Heloise Chancey Mysteries, M.J Tjia brings us another enthralling historical crime where the twists and turns are as numerous and dark as the London streets which serve as their setting." 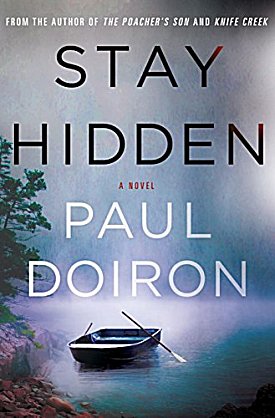 Synopsis: "A woman has been shot to death by a deer hunter on an island off the coast of Maine. To newly promoted Warden Investigator Mike Bowditch, the case seems open and shut. But as soon as he arrives on remote Maquoit Island he discovers mysteries piling up one on top of the other.

The hunter now claims he didn’t fire the fatal shot and the evidence proves he’s telling the truth. Bowditch begins to suspect the secretive community might be covering up the identity of whoever killed the woman, known as Ariel Evans. The controversial author was supposedly writing a book about the island's notorious hermit. So why are there no notes in her rented cottage?

The biggest blow comes the next day when the weekly ferry arrives and off steps the dead woman herself. Ariel Evans is alive, well, and determined to solve her own “murder” even if it upsets Mike Bowditch’s investigation and makes them both targets of an elusive killer who will do anything to conceal his crimes." 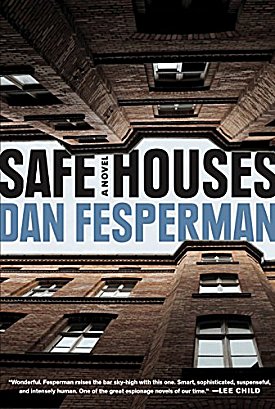 Synopsis: "West Berlin, 1979. Helen Abell oversees the CIA's network of safe houses, rare havens for field agents and case officers amidst the dangerous milieu of a city in the grips of the Cold War. Helen's world is upended when, during her routine inspection of an agency property, she overhears a meeting between two people unfamiliar to her speaking a coded language that hints at shadowy realities far beyond her comprehension. Before the day is out, she witnesses a second unauthorized encounter, one that will place her in the sight lines of the most ruthless and powerful man at the agency. Her attempts to expose the dark truths about what she has witnessed will bring about repercussions that reach across decades and continents into the present day, when, in a farm town in Maryland, a young man is arrested for the double murder of his parents, and his sister takes it upon herself to find out why he did it." 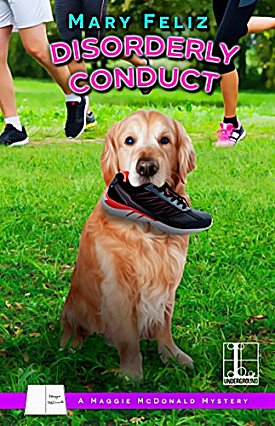 Synopsis: "With a devastating wildfire spreading to Silicon Valley, Maggie preps her family for a rapid evacuation. The heat rises when firefighters discover the body of her best friend Tess Olmos’s athletic husband—whose untimely death was anything but accidental. And as Tess agonizes over the whereabouts of her spouse’s drop-dead gorgeous running mate, she becomes the prime suspect in what's shaping up to become a double murder case. Determined to set the record straight, Maggie sorts through clues in an investigation more dangerous than the flames approaching her home. But when her own loved ones are threatened, can she catch the meticulous killer before everything falls apart?" 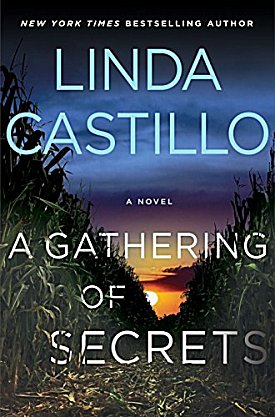 Synopsis: "When a historic barn burns to the ground in the middle of the night, Chief of Police Kate Burkholder is called in to investigate. At first, it looks like an accident, but when the body of eighteen-year-old Daniel Gingerich is found inside—burned alive—Kate suspects murder. Who would want a well-liked, hardworking young Amish man dead? Kate delves into the investigation only to find herself stonewalled by the community to which she once belonged. Is their silence a result of the Amish tenet of separation? Or is this peaceful and deeply religious community conspiring to hide a truth no one wants to talk about? Kate doubles down only to discover a plethora of secrets and a chilling series of crimes that shatters everything she thought she knew about her Amish roots—and herself.


As Kate wades through a sea of suspects, she’s confronted by her own violent past and an unthinkable possibility." 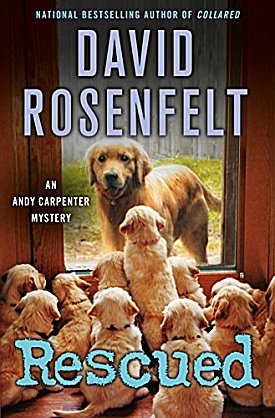 Synopsis: "Defense lawyer Andy Carpenter is reluctant to take on any more cases. He’d much rather spend his time working for his dog rescue organization, the Tara Foundation, than find himself back in a courtroom. However, when a truck carrying over seventy dogs from the South to the rescue-friendly northeast turns up with a murdered driver, Andy can’t help but get involved.

Of course, Andy is eager to help the dogs, many of whom come to the Tara Foundation while awaiting forever homes – it’s the man accused of murder who he has a problem defending. The accused just happens to be his wife Laurie’s ex-fiance; her tall, good-looking, ex-Marine ex-fiance. Even though he acknowledges having argued with the victim, he swears that he is not a killer, and though he would rather not, Andy has to admit he believes he's telling the truth.


For Andy, even with dozens of successful cases behind him, this case that his wife insists he take may prove to be his most difficult." 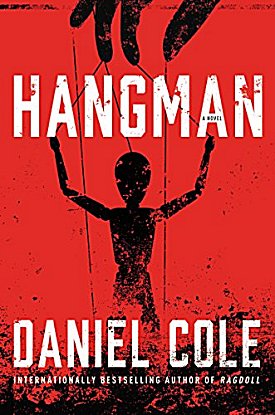 Synopsis: "Detective Emily Baxter is still reeling from the Ragdoll case, and from the disappearance of her friend William “Wolf” Fawkes. Despite her reluctance to jump into another gruesome case, she’s summoned to a meeting of a new FBI/CIA/UK law enforcement task force in New York. There, she is presented with photographs of the latest copycat murder: a body contorted into a familiar pose, strung up from the Brooklyn Bridge, the word “BAIT” carved deep into its chest.

As the media pressure intensifies, Baxter is ordered to assist with the investigation and attend the scene of another murder, again with a victim inscribed with a word—“PUPPET.”


The murders continue to grow in spectacle and depravity on both sides of the Atlantic, and the team helplessly plays catch-up. Baxter must shake off the grief and fear that have paralyzed her for the last year so she can stop another terrible killer before it’s too late." 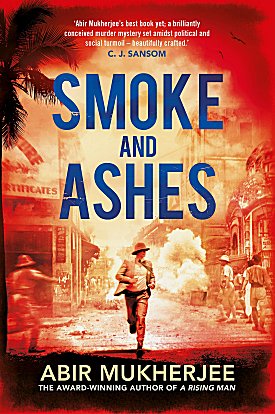 Synopsis: "Captain Sam Wyndham and his side-kick Surrender-Not Banerjee return in this dynamic, prize-winning crime series set in 1920s Calcutta, India. There’s a serial murder case on the cards in this atmospheric addition to the series. Sam Wyndham must investigate this most unusual series of deaths, whilst his past life – fighting in the Great War – proves harder to deal with than ever before." Title: A Tale of Two Murders
Author: Heather Redmond
Series: #1 in the Dickens of a Crime historical series set in London.
320 pages

Synopsis: "In the winter of 1835, young Charles Dickens is a journalist on the rise at the Evening Chronicle. Invited to dinner at the estate of the newspaper's co-editor, Charles is smitten with his boss's daughter, vivacious nineteen-year-old Kate Hogarth. They are having the best of times when a scream shatters the pleasant evening. Charles, Kate, and her father rush to the neighbors' home, where Miss Christiana Lugoson lies unconscious on the floor. By morning, the poor young woman will be dead.

When Charles hears from a colleague of a very similar mysterious death a year ago to the date, also a young woman, he begins to suspect poisoning and feels compelled to investigate. The lovely Kate offers to help—using her social position to gain access to the members of the upper crust, now suspects in a murder. If Charles can find justice for the victims, it will be a far, far better thing than he has ever done. But with a twist or two in this most peculiar case, he and Kate may be in for the worst of times . . ."

Well, how did I do? Did any of my picks make it to your own wish lists? Which ones? You know inquiring minds would love to know!