Eaves of Destruction by Kate Carlisle 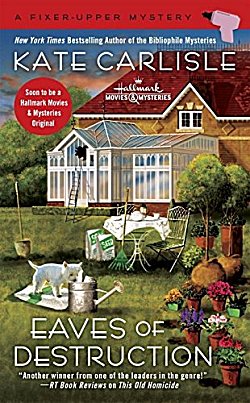 First Lines: I really love my job. But I've got to admit, some days are better than others.

The annual Victorian Home and Garden Tour is about to kick off in Lighthouse Cove, California, and the town's premier contractor, Shannon Hammer, is in high demand among the rival homeowners. Shannon had anticipated the extra workload and hired more crew, but what she didn't expect was just what sort of cutthroat tactics some of the homeowners are willing to use in order to win the coveted Best in Show award.

But this year, it's especially tough because, not only is Shannon saddled with the client from hell, she's got Lighthouse Cove's corrupt building inspector shadowing her every move. When the inspector is found dead on one of Shannon's job sites, there's certainly no shortage of suspects, but when another body is discovered, this savvy contractor knows she's got a killer to nail down-- and fast.

Between Kate Carlisle's Fixer-Upper mysteries and Juliet Blackwell's Haunted Home Renovation series, I have no problem finding a cozy to fulfill my craving for restoring old houses and catching killers. I had even more fun this time around while reading Eaves of Destruction because of two of the characters.

Petsy is the client from hell. When you see this woman coming down the street, you immediately duck down an alley and pray she doesn't see you. And then there's Scully, the sleazeball building inspector who never met a bribe he wouldn't accept. For the first part of the book, I had an embarrassment of riches when I tried to decide which one of these characters I wanted to have die first. (I'd forgotten to read the synopsis; this series is an auto-buy for me.) And that's all I'm going to say about victims because I don't want to ruin solving the mystery for any of you.

If it sounds like I had fun reading Eaves of Destruction, I did. I really enjoy the setting and the characters, and the mystery was fun to attempt to solve as well. As I said before, this series is an auto-buy for me... and now I'm back in the position of being forced to wait for the next one. Ah well!