Another Look at Peter Temple's The Broken Shore 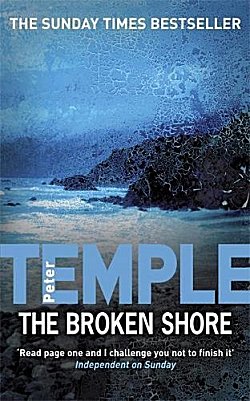 
First Line: Cashin walked around the hill, into the wind from the sea.

Seriously injured in the line of duty in Melbourne, Joe Cashin returns to the coast of southern Australia where he grew up. There he enjoys being a small town cop while his body slowly heals.

An elderly local millionaire is bludgeoned to death, and the investigation turns up three aboriginal boys trying to pawn the victim's watch. An ambush is put in motion, two of the boys die, and the police close the case. They are satisfied that the killers have been brought to justice. Only Cashin feels that something's not quite right, and he goes about putting the pieces together on his own time.

The first half of this book is a subtly written character study of many layers and its own inexorable pace. There is humor. There is a puzzling backstory. There is the casual violence of well-entrenched bigotry. There is a depiction of place so atmospheric you can taste the salt spray and hear the surf crashing on the rocks:

Even standing well back from the crumbling edge of the keyhole, the scene scared him, the huge sea, the grey-green water skeined with foam, sliding, falling, surging, full of little peaks and breaks, hollows and rolls, the sense of unimaginable power beneath the surface, terrible forces that could lift you up and suck you down and spin you and you would breathe in icy salt water, swallow it, choke, the power of the surge would push you through the gap in the cliff and then it would slam you against the pocked walls in the Kettle, slam you and slam you until your clothes were threads and you were just tenderised meat.

By the time Cashin has gathered the pieces of truth and is beginning to put them together, there is no way you can stop reading. It doesn't have a thing to do with the time you have invested in the book. It has everything to do with the strength of Temple's writing and the siren song of the story he has to tell. You are well and truly hooked, and even though you have guessed where the clues are pointing, and you dread the outcome of it all, you can't stop turning the pages until every last word is read and you're light-headed and slightly queasy and stunned by the power of The Broken Shore.

After I'd finished the last page, all I could do was sit there and let my breathing slow down...let the dizziness pass...think about what I'd read. I felt as though the Kettle had just spit me out.

This is the first book by Peter Temple that I've read. It won't be my last.

[Note: Temple does use a bit of Aussie slang in this book. I usually don't have a problem with this because I've read many a book that didn't cater to the American public. Even so, I did find a word or two that I couldn't figure out from its context. If you don't have friends who can help you out, you can always make use of the Internet and websites like Australian Slang.]