Another Look at Moonlight Downs by Adrian Hyland 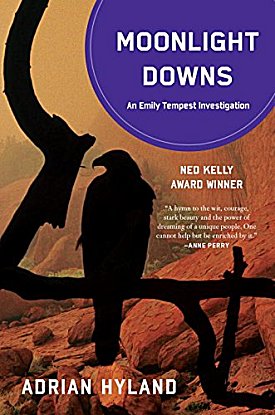 
First Line: I parked my little white ute on the outskirts of the camp and sat there, looking out at the scatter of corrugated iron hovels.

When I finished this book, I was speechless. I was smiling. I was in awe. And I was afraid that I wouldn't be able to do what I'd just read justice in a review. I'm going to give it a shot anyway.

After years of traveling the world, Emily Tempest, half-Aborigine, half-white, has returned to Moonlight, the community in the desert of Northern Australia where she grew up. Within hours of her arrival, respected community leader Lincoln Flinders' body is found, and all signs point to an Aboriginal sorcerer as his murderer. With the help of the police, Emily is determined to find Lincoln's killer, for the dead man held a very special place in her heart:

And how had Lincoln drawn me into this world? By stories. Stories and songs. With Lincoln a journey of any description was a rolling dialogue with the country. A track by a waterhole or an unusual rock, a tree shaped like a woman or a circle of stones, the subtlest change in the landscape, any of these things was enough to get him going: he'd tell you the tale of the ancestral beings that had made it, the songs they'd sung, the paths they'd carved in the Dreaming. For a wide-eyed five-year-old he'd made the country come alive.


Although the mystery is intriguing, and the bad guy slips deliciously into the picture at the end, the strength of this book lies in its characters and its depiction of the landscape and its people. Hyland's language is earthy, sometimes profane, and often very funny. Fortunately for many of us, there are glossaries in the front of the book which decipher the slang. (I made regular use of them at the beginning.) Hyland portrays the life of these people as it really is. He doesn't use politically correct euphemisms; he doesn't try to sugarcoat anything, and the book is all the more powerful for it.

Emily is such an in-your-face creature. Her ambivalence about the aboriginal and white worlds that she's a part of is a strong theme in this novel. She makes me laugh. She certainly doesn't mince her words, and she doesn't know the meaning of the word "quit". She's just the type of character I want to read more about.

After reading Moonlight Downs, not only did I feel supremely entertained, but I felt as though I knew a bit more about a totally different culture thousands of miles away from my comfortable home in metropolitan Phoenix. This book is sitting pretty on my Best Reads of 2009 list.

Give me a couple of days to recuperate from vacation, and Kittling: Books will be back to normal!