Murder, She Knit by Peggy Ehrhart 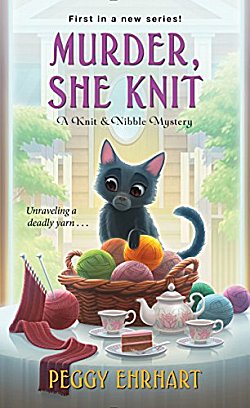 First Line: Catrina was nowhere to be seen.

Widow and empty-nester Pamela Paterson keeps busy as an associate editor of the Fiber Arts craft magazine, and she enjoys the weekly meetings of the Knit & Nibble group she founded there in quaint Arborville, New Jersey. When she meets Amy Morgan and learns that her old friend has moved back into town, she encourages her to join her group that loves to knit, eat members' delicious baking, and do just a little bit of gossiping.

But Amy doesn't show up on the night of the Knit & Nibble meeting-- at least Pamela doesn't think she does-- until Pamela finds Amy's body in a hedge on her property, a knitting needle stabbed deep into her chest. Pamela sees that whoever committed the murder also took off with Amy's knitting bag. With her expertise, she may be the only one able to track down the killer, but she's got to work fast. She may be next on the murderer's list.

Peggy Ehrhart has created a knitting group that's an excellent mix of ages, sexes, and financial status. Type A Roland has joined the group on the suggestion of his doctor due to his high blood pressure, and I love the way the man follows a pattern when he knits. An elderly member knits for charity and Bettina is Pamela's neighbor who's always ready to do a little snoopi...err... sleuthing. The members of this group are all individuals, and they're all real; Ehrhart doesn't go overboard in making them quaint, quirky, and cute.

I also enjoyed Pamela's editing job for the craft magazine, but knitting and editing aren't the best parts of this first-in-a-new-series. The mystery is a good'un, and its resolution blindsided me even though it should not have because the clues were all Just. Right. There. Pamela is honest with herself; she knows that the major reason she's doing her own investigating is that she's nosy, but at least she does her very best to work closely with the police because they are the folks with the training.

Good crafts. Good mystery. And the best part of all: good relationships. Murder, She Knit is filled with relationships. There's the growing relationship between Pamela and the little kitten she's named Catrina. There's a strong suggestion of a romantic interest for Pamela, too. But most of all, there are the strong, lasting relationships between all the members of Knit & Nibble. This book is filled with so many good food smells, and knitting, and wonderful fellowship that I found myself smiling through almost the entire book. Bring on the next one-- my needles and black bottom cupcakes are ready and waiting!