A Dying Note by Ann Parker 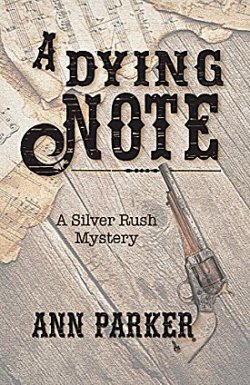 First Line: Not my hands!

It's 1881, and Inez Stannert and her ward, young Antonia Gizzi, are now settled in San Francisco. Inez has turned her business acumen toward investing in legitimate businesses, one of them being a music store owned by a celebrated local violinist. She might be the co-owner of a saloon in Leadville, Colorado, but she's turned her back on that life-- not only to raise Antonia properly but for herself as well.

All her careful plans may come tumbling down when she and Antonia are dragged into the mystery of a young musician's death. The musician turns out to have ties in Leadville, ties that threaten to expose Inez's former life. They aren't the only ones looking for answers: Wolter Roeland de Bruijn, the "finder of the lost," has been tasked with finding the young man's killers and dispensing justice. Lives and reputations are on the line, and Inez is running out of time.

It's always a pleasure to watch a series grow from strength to strength, and this is exactly what I've seen happen with Ann Parker's Silver Rush series. There's always some fascinating historical snippets to learn, a fantastic setting, an engrossing mystery to solve, and a strong, intelligent main character to cheer on. Inez Stannert has not had an easy life, and she's needed every bit of her intelligence and determination to survive and to succeed.

What makes A Dying Note even more interesting is the addition of young Antonia Gizzi to the cast of characters. Antonia's short life has been even more difficult--she and her mother were abandoned by her father, and as her mother lay dying, Antonia had to learn how to live on the streets of Leadville. This little girl is sharp as a tack and, as my grandfather would say, as independent as a hog on ice. I loved Antonia's ability to answer questions truthfully without actually telling the honest truth. That takes a lot of skill. She's used to making her own decisions, and she doesn't trust anyone but Inez. Inez is probably the only person strong enough to deal with Antonia, and I'm certainly looking forward to seeing what happens next.

The pace of A Dying Note is excellent, and the scenes in which various characters are being followed through the streets of San Francisco are downright nerve-wracking. Even though the whodunit is relatively easy to deduce, learning all the hows and whys and getting the person out into the open is fun. This series is for all fans of historical mysteries, and if you haven't given it a try yet, I suggest you start at the beginning with Silver Lies. You've got some good reading ahead of you!