A Breath After Drowning by Alice Blanchard 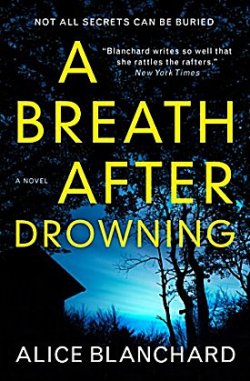 Part of the reason why Kate Wolfe became a child psychiatrist is because of her own childhood: a mother who committed suicide, an emotionally unavailable father, and a younger sister who was brutally murdered when they were children. One of the few comforts Kate had was knowing that the man who killed her sister was on death row.

However, when a retired police detective gets in touch, he tells her that he's certain that Kate's sister was only one of many victims of a serial killer. Now Kate must face the possibility that her sister's killer walks free. In trying to learn the truth, she uncovers long-buried family secrets, but what Kate doesn't seem to realize is that, while she hunts for a killer, a killer is hunting her.

Having read Blanchard's Darkness Peering and The Breathtaker, I knew that I would enjoy her writing style. That certainly hasn't changed; her words flow smoothly and create vivid pictures, and the story moved along quickly. However, I am glad the story moved swiftly because the book suffers from "too much middle" and needed tighter editing. It certainly didn't help that I deduced very early on the identity of the killer, and-- although she has reason to be fragile-- Kate's insecurities wore me down.

On the whole, A Breath After Drowning is a fast-paced enjoyable read with a thought-provoking plot, and I'm glad I read it. Give it a try!