A Baby's Bones by Rebecca Alexander 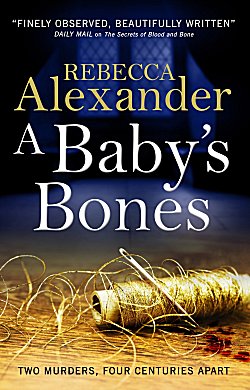 First Line: It was a bone from a baby's arm.

When called upon to excavate a sixteenth-century well, archaeologist Sage Westfield finds something completely unexpected. The bones of a woman and a newborn baby make it clear that she and her team have stumbled upon an historical crime scene-- one that is interwoven with local legends of witchcraft no less.

But there's more than meets the eye to this four-hundred-year-old mystery. The cottage that sits on the same piece of property as the well is claimed to be haunted, and the local vicar is being plagued with abusive phone calls. Then a tragic death occurs, making it all too clear that there's a modern-day murderer at work.

Rebecca Alexander's A Baby's Bones is a well-paced, engrossing mystery with sympathetic characters and two timelines that really compliment each other. Lovers of archaeology and anthropology should enjoy this mystery that touches on witchcraft, alchemy, French embroiderers, and the usual lineup of unrequited love, jealousy, and a few other sins.

Archaeologist Sage Westfield is a strong, interesting main character who can't rest until she puts together as many pieces of this centuries-old puzzle as she can. I was thrilled to see that this is the first book in a new series because I wasn't ready to leave Sage and the other characters that Alexander has created. A Baby's Bones strongly reminded me of my favorite Wesley Peterson series by Kate Ellis, which also has two timelines and an archaeological context, although there's no strong police presence here.

If your preference is for strong mysteries, full-bodied characters, and a bit of history, I highly recommend Rebecca Alexander's first Sage Westfield mystery.