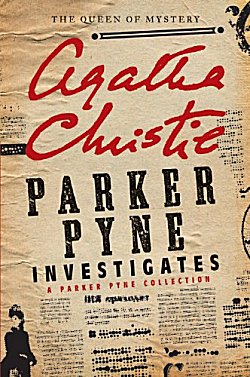 Ad placed in the newspaper by Parker Pyne:

"ARE YOU HAPPY? IF NOT, CONSULT MR. PARKER PYNE, 17 RICHMOND STREET."

After reading two of Agatha Christie's short stories featuring the very unconventional private investigator, Parker Pyne, I knew I had to read more, so when I came across this collection, I grabbed it.

Pyne relies upon his thirty-five years in a government office compiling statistics to help him solve any case that's presented to him. Some of the short stories revolve around people who respond to his advertisement in The Times, but Pyne also travels to more exotic climes, such as Jordan, Syria, and Iran and finds himself solving puzzles in those countries as well.

When it comes to solving mysteries relying solely upon his observations of human nature, he has only one equal: Miss Marple herself, although the elderly lady never managed to get paid for all her troubles and Pyne does.

The stories see appearances by two characters seen elsewhere in Christie's fiction: the novelist Ariadne Oliver and Miss Lemon the secretary. (Now I'm curious as to whether Lemon worked for Pyne first before moving on to Hercule Poirot or vice versa.) When in London, Pyne helps those responding to his ad, and I love seeing how he puts his solutions together using a select few actors and other specialists whom he knows. When he's faced with mysteries while traveling abroad, they are more normal investigations. (Naturally, since the people he employs are not traveling with him.)

With the exception of twice when Christie's racism was clearly shown, I found this collection of stories to be delightful, and I'm certainly glad that I've persisted in sampling writing from the Golden Age of Mysteries.