The Pajama Frame by Diane Vallere 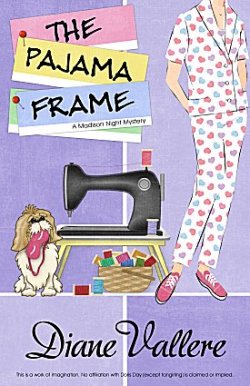 First Line: "Alice Sweet left me a pajama factory?" I asked in disbelief.

People just seem to love leaving interior decorator Madison Night strange inheritances. This time octogenarian Alice Sweet has died and left Madison a pajama factory. Sweet Dreams was once a thriving business that employed many Dallas area women, but it closed decades ago when a tragic accident took the life of a young model.

Madison is in no mood to deal with drama, but when the old lady's family members and even special interest groups don't want to wait to get inside the old factory, Madison finds herself investigating a tangled mess of secrets and lies-- whether she wants to or not.

In The Pajama Frame, Madison is at a crossroads in her life, and with Hudson in Hollywood, she's thrown together with Tex Allen in trying to solve this mystery. Her reasons for feeling out-of-kilter are very real, and when her emotions begin to waver between the present Tex and the absent Hudson, it's much more a case of mind and heart than just mere hormones. As a reader who really doesn't care for romance in her mysteries, I appreciate this series' emotional depth.

Vallere keeps readers guessing at what's really going on in that old pajama factory, and since I was much more interested in looking at all the sleepwear, fabrics, and machinery, I was thrown for a loop when the nefarious goings-on were uncovered. The author threw in some top-notch misdirection, that's for sure! (And before I forget it, I'd like to say how much I liked the fact that the owner of Sweet Dreams was a businessman with true integrity.)

But as good as the mystery is in The Pajama Frame, it's the character of Madison Night that I love. When someone tries to intimidate her into taking over the arrangements for something, Madison does not cave in. The would-be intimidator is met with silence... and he suddenly changes his mind. There are also touches of humor throughout the book, one of my favorites being when Donna Nast claims that Madison is a goody-goody.

I'll be honest and admit that one of the reasons why I like Madison so much is that I identify with her a bit. She's staring fifty in the face and took a long, long time to commit to a romantic relationship. She's got a bum knee. She likes to swim. Those who try to intimidate her only make her angry. And when she's in real danger, she makes sure her dog is safe first.

There is depth and there is soul in Diane Vallere's Madison Night series. Not to mention humor and a whole lot of other good stuff. If you have yet to sample this series, by all means, start with Pillow Stalk. I'm willing to bet you'll find out that having Doris Day as a role model is a very good thing indeed. This is now my favorite cozy series, and I'm hoping it will be yours, too.