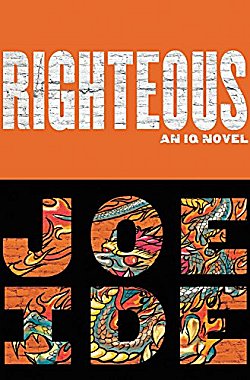 First Line: Isaiah was seventeen years old when his older brother, Marcus, was killed in a hit-and-run.

It's been ten years since Isaiah Quintabe's brother was killed in a hit-and-run, and Isaiah ("IQ") is as determined as ever to find the driver of the vehicle. But the bills do need to be paid, so he and his sidekick Dodson take a case in Las Vegas where Chinese gangsters are after a young DJ and her boyfriend. If IQ doesn't find the two first, the gangsters will kill them. Impatiently waiting in the wings is the love of IQ's life who just happens to be the DJ's sister. What Isaiah doesn't know is that-- through all the twists, turns, and treachery of this case-- he's going to be led straight to the mastermind behind his brother's death.

For many readers, the world of Joe Ide's Isaiah Quintabe might as well be on another planet. Isaiah is a brilliant young man who lives in the 'hood-- the East Long Beach section of Los Angeles. He helps the people who live there by taking on cases that the police won't bother with, and he gets paid in a variety of ways: homecooked food, a live chicken, whatever people can afford. In Righteous, Ide's character-- known by everyone as IQ-- is the voice of the 'hood; he tells the truth, and he tells it straight out, often in very poetic language.

In a way, the hate felt good. You were righteous, godlike, the dispenser of justice. Hate dispelled your fears and forged every disappointment, setback, loss, humiliation, and failure that ever happened to you into one massive steel sledgehammer of rage, poised to obliterate, and for one brief, purifying moment, give you relief.


Even though IQ's world may be alien to many, it is populated by characters that jump off the page. There's Dodson, a young man of dubious abilities who nevertheless wants to advance from being IQ's sidekick to a full-fledged partner. Fortunately, Dodson has moved in with the kickass Cerise who will help keep him on the straight and narrow. A favorite of mine is Deronda ("I'm not impulsive. I just make up my mind fast.") who's not waiting for her shapely behind to lead her to fame and fortune. No, not Deronda. She has a food truck now. One of the most interesting is Manzo, who sees that the way his gang has always conducted business is going to kill them all. He's trying to make changes, but there are members like Ramona who are so deep into the life that they can't see anything else.

There are characters who want something better and are willing to sacrifice and change to get it, and there are those who seemingly have all the advantages-- like DJ Janine and her boyfriend Benny-- who are traveling full-throttle down the highway to hell. Yes, I do love Ide's characters. They make me think, and they make me feel.

But the author isn't just a wizard who creates marvelous characters. He knows how to construct a plot that keeps you guessing, and he knows how to keep it moving fast. I probably wouldn't survive very long in Isaiah Quintabe's world, but I certainly do appreciate Joe Ide letting me visit.