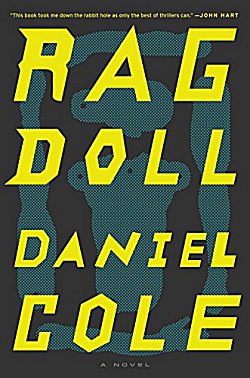 First Line: Samantha Boyd ducked under the wobbly police barrier and glanced up at the statue of Lady Justice perched atop London's infamous Old Bailey courtrooms.

There's no more controversial detective than William Fawkes. Known as The Wolf, he's just been reinstated after being suspended for assaulting a vindicated suspect. Still under psychiatric observation, he's eager for a big case. And he gets one. When he's called to a crime scene by his former partner, Detective Emily Baxter, he knows this is the case he was hoping for: the body is made of the dismembered parts of six victims sewn together like a puppet. The corpse quickly becomes known as "The Ragdoll."

Fawkes has six victims to identify, but his job becomes infinitely harder when his reporter ex-wife receives photographs from the crime scene along with a list of six names and the dates on which the Ragdoll Killer plans to murder them. The last name on the list is Fawkes'. While Baxter and her trainee partner Alex Edmunds work on figuring out what links the victims together, Fawkes can't help but believe that the catalyst for these killings has more to do with him and his past than anyone realizes.

With a gruesome stitched-together corpse, many readers will probably expect Daniel Cole's Ragdoll to be filled to overflowing with gore. Surprisingly, it isn't. What it does have is a breakneck pace, a wonderfully convoluted plot, and an intense cast of characters. For a character-driven reader like myself, Cole's cast is what made the book. No, I couldn't solve the mystery ahead of time-- which is always a plus-- but the characters are what wouldn't let me go.

The trainee Edmunds is brilliant at wading through mountains of information and digging up the facts that they need to solve the crime. In addition, he may be new in position, but he has the intestinal fortitude to stand up to his superiors when he feels that he is in the right. The entire team may be saddled with a pencil-pushing, media-hungry, wardrobe nightmare of a boss, but the detectives' immediate supervisor, Simmons, is a good man who gets right in the thick of the investigation with them and buckles down to do some of the grunt work. How often does that happen?

Emily Baxter has a terrible temper, is an even worse driver, and secretly pines for Fawkes, who knows her flaws and has been known to cover for her when necessary. Fawkes himself goes spectacularly off the rails, and this makes him very unpredictable. With these two main characters, readers are never quite sure what's going to happen.

Although the ending of Ragdoll unraveled a bit, I really enjoyed the story and the characters, and I'm looking forward to reading the next book, Hangman, which will be out at the end of July.