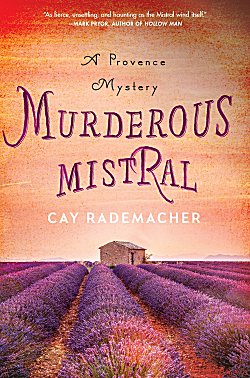 First Line: Roger Blanc kicked at a stone, startling a black scorpion underneath it.

An investigator with the anti-corruption unit of the French Gendarmerie, Capitaine Roger Blanc was a bit too good at his job, and as a consequence, he's been removed from Paris and sent to a remote corner of Provence, far to the south of France and well away from any hint of political power.

The stress has been too much for his marriage, but at least he inherited a 200-year-old, half-ruined house, so he's not homeless while he's adapting to his new job. His first work assignment is a murder case. A man with no friends and an abundance of enemies was found shot and burned, and when a second man dies under mysterious circumstances, Blanc finds himself digging deep into dark corners of Provence that he never even knew existed.

There are two things I've taken away from my reading of Murderous Mistral: that when Blanc uncovers a scorpion, his first reaction isn't to stomp on it as most people would, and that, at certain times of the year, Provence smells overwhelmingly of wild thyme. That's not much, is it?

For the most part, I did not find either the characters or the mystery to be standouts. The absolute best parts of the book were the descriptions of the countryside and of Blanc's inherited home. I perked up every time he started to do something with that old building. Compared to my almost non-existent interest in the mystery, I would've been much happier if this had been turned into a fixer-upper series on Home and Garden Television.

Of course, your mileage may definitely vary, and although I did have problems with the characters and the story, I found Murderous Mistral to be worth reading for the loving descriptions of Provence alone.