Mourning the Little Dead by Jane A. Adams 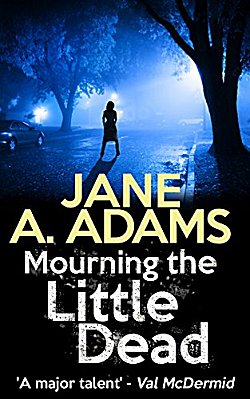 First Line: The day she heard about Helen had been heavy with the threat of storms.

A signed, sealed confession is found in a dead man's papers, and now the spotlight is back on a twenty-three-year-old cold case. Twelve-year-old Helen Jones was on her way to school when she disappeared without a trace. What is chilling is that this has come to light as yet another young girl has gone missing.

Naomi Blake was Helen's best friend and the last person to see her alive. Now Naomi is blind, a reluctant ex-policewoman, and she decides to uncover what really happened to Helen Jones. What bothers Naomi is that the police are keeping very very quiet about the confessor's identity, but that's just the first unsettling incident in this very personal case.

Having a blind, ex-police detective as the main character is what drove me to read Mourning the Little Dead, and the characters are the strongest part of the book. I enjoyed seeing the world from the point of view of a blind person, and her service dog Napoleon is a gem. Naomi is able to keep up with most points of the investigation because her boyfriend Alex is a police officer, and she has a wonderful, supportive group of friends to help her. Of those, my favorite is the teenage Patrick who has a very level-headed way of seeing things-- and who loves spending time with Napoleon.

For me, the weakness in the book is the fact that I deduced the killer's identity very early, and once that happened most of my interest in the book waned, regardless how much I liked the characters. However, I do like Adams' writing style and her characters enough to be interested in reading the next book in the series.