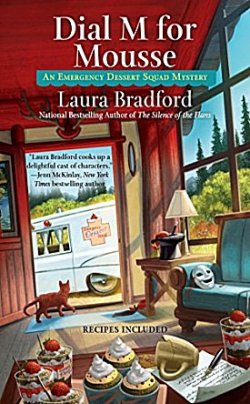 Five motivational "rescues" at an artists' retreat are just what Emergency Dessert Squad owner Winnie Johnson needs to take her mind off her relationship woes. What she doesn't need is to walk in on five artists standing over the dead body of the retreat owner. Now she's got to hope that all her suspects have a sweet tooth so she can keep going back to ask them questions until she finds the killer.

In this third installment of one of my favorite cozy series, the mystery-- which is a good one-- often takes a back seat to Winnie's various relationship woes. There's a teenage girl who stubbornly insists on being the only one who's happy, and then there are Winnie's two elderly friends who take turns getting their emotional noses out of joint. The highlight of all this angst is that Winnie gets to say (and to hear) words that each and every one of us on this planet needs. One of the things that makes Winnie such a strong character is her big heart and her love for her friends, and that's the main focus of Dial M for Mousse.

Speaking of Winnie's friends, I can see some readers being upset with the character of Mr. Nelson, a man in his late seventies who loves the sight of a woman's cleavage. He seldom misses the weather report because of the statuesque weather girl, and he has various prime viewing spots on his porch and in his apartment so that he can indulge his hobby. Having had my own cleavage stared at ever since I had one, I have to admit that this can be a tiny bit tiresome, but never once is Mr. Nelson any sort of threat. The man keeps his hands to himself, and he never makes an inappropriate comment. In fact, he'd be the first person to take his cane to someone who did. Mr. Nelson is definitely one of Winnie's most beloved friends, and I enjoy seeing what he gets up to in each book.

Now...if only the focus had remained on the mystery more! I really enjoyed deducing why the woman was killed and which one of the five did the deed. Not only that, but there's an added gem in each of the Emergency Dessert Squad mysteries: the names Winnie gives her delectable confections. Those names alone can be worth the price of admission, and I can't wait for the next book!