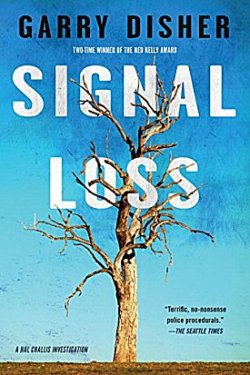 Two hit men sent on a job to the Peninsula southeast of Melbourne, Australia have a bad day, and the resulting brush fire draws attention to a drug lab and two burned bodies in a Mercedes.

With meth-related crime on the rise, interdepartmental bickering breaks out and Inspector Hal Challis has to fight to keep control of this case. Meanwhile, Sergeant Ellen Destry-- the newly appointed head of her department's sex crime unit-- is hard at work hunting for a serial rapist who is very adept at not leaving any clues.

Both Challis and Destry have complex cases with many interwoven threads to untangle, and their teams have to be at the top of their game to solve them both.

The opening chapter of Garry Disher's latest Hal Challis investigation, Signal Loss, is tense, very human, and even darkly funny-- and it does what it's supposed to do: grab your attention and make you want to read as quickly as you can all the way to the very last page.

Disher is a master of Australian noir, and although the emphasis in this book is more on the investigations than it is the characters' personal lives, you still know what's happening to them when they're not at work. At work, Challis assigns Pam Murphy a case that zeroes in on one of her personal prejudices, and the young woman realizes that she's got a lot to learn about human nature. There's also a (human) cougar on the prowl. She's head of the drug squad, and when she's not after all the glory, she's eyeing some of the men. I would've rolled my eyes, but these women-- and men-- do exist.

The interaction between characters is very good, but the investigations are even better, and readers can learn how things like Facebook are now being used to fight crime. You can also increase your knowledge of Australian slang, and with a smartphone close at hand, it's only a matter of seconds to learn what is being said if the meaning isn't clear in the context (and it usually is).

I haven't managed to read every book in this series, but I didn't feel lost while immersed in Signal Loss. Garry Disher is an excellent writer, and if you haven't read any of his work, I do recommend him.