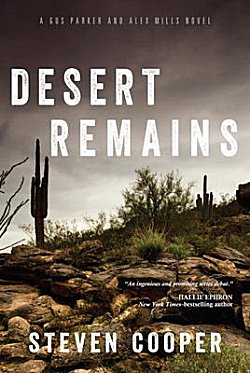 The desert caves in the Phoenix metropolitan area are being filled with bodies. A psychopath is killing women and recording his crimes on the walls of the caves in which he leaves them. Everyone wants the case solved immediately (if not sooner), and with the body count rising and another detective wanting Alex Mills taken off the investigation, Mills turns to Gus Parker. He's worked with the "intuitive medium" before and knows that the man can have visions that point to real clues.

When Parker visits the crime scenes, he does have visions, but he doesn't know what they mean. As he works to interpret them, Gus finds himself hindered by a lovelorn stalker. Just what he needs when he knows that innocent people's lives are at stake.

After reading Steven Cooper's Desert Remains, I know I want more. Cooper's lyrical descriptions bring the desert around Phoenix to life, and he's got two main characters who deserve many more cases to solve. The sensitive and touching beginning shows us just what sort of a police officer Alex Mills is, and we go on to learn about his solid marriage and the trouble his teenage son gets into-- trouble that could have wide-ranging consequences both for himself and his father. The single Gus Parker provides us with a bit of comic relief here and there, and his psychic gifts are handled well-- especially since those gifts are not his full-time job. Both men are likable, hard-working, and dedicated, and their circles of family and friends make for a strong secondary cast.

I did find that the book wobbles once or twice. For some reason, a brief description of someone's behavior clued me into the killer's identity very early on, and I thought the lovelorn stalker subplot could have been left out entirely. I believe this subplot made the pace of the book uneven, and some editing to tighten everything up was needed as well.

But the story, the characters, and the setting are all there, and I'm really looking forward to the next book in this series. Bring it on!