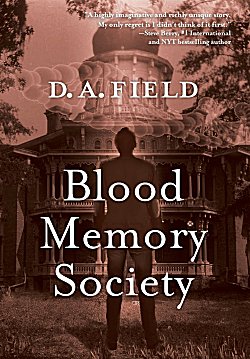 Will Dunbar is just about to begin his dream job as head of the Reproductive Medicine Department at the Mayo Clinic when a former West Point classmate intervenes on a matter of national security. Dunbar's knowledge in the field of fertility and his desire to do what's best for his country are about to toss him headfirst into a secret government program, family secrets, international conspiracies, and untold danger.

When I heard that the fuel behind this book was the premise of inherited memory, I was afire to read it. I had my own brush with this type of memory, and when I learned that someone had written a book about a group of people who had retained about four centuries' worth of their ancestral memories, I knew I had to read it. Unfortunately, my anticipation was pretty much for naught.

By the second paragraph of Blood Memory Society, I was already mentally correcting the writing-- superfluous words, awkward word choices-- and my heart sank. Not enough was done with the premise of inherited memory other than throwing out a bit of science in an attempt to explain it and a scene in which Dunbar's sailing companion uses memories of an ancestor's skills to save their lives. Yes, someone is out to kill all those who possess this gift, but this just turns the book into a rather run-of-the-mill thriller as the reader is thrown into one chase-and-survival scenario after another.

Important discoveries are telegraphed so they are no longer surprising, and speaking of surprises, the bad guys aren't very shocking either. The author needs some more writing experience under his belt and a good editor because I've read that this is the first book in a series. A series will certainly give the author the space he needs to flesh out this fascinating concept, but I really don't know if I want to go along for the ride.