A Murder for the Books by Victoria Gilbert 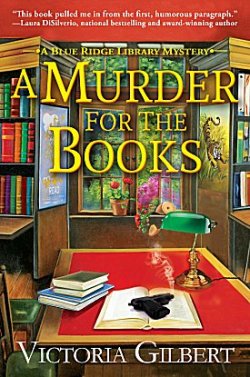 First Line: Anyone who claims there are no stupid questions has never worked in a public library.

A disastrous love affair has university librarian Amy Webber moving in with her aunt in a quiet, historic Virginia mountain town. The public library Amy now manages is severely underfunded-- and has an overabundance of eccentric patrons. She can cope with that. What she doesn't want to cope with is a handsome, charming man moving in next door. It's just too soon.

Richard Muir is a dancer-turned-teacher and choreographer who's inherited the farmhouse next-door to Amy's aunt. Town gossip has always claimed that the original owner of Muir's house was poisoned by his wife, who vanished after a sensational murder trial in 1925. Richard wants to clear the woman's name and enlists Amy's help. Amy is skeptical until her research uncovers some secrets of the town's leading families. When murders begin to occur, Amy and Richard have to work fast to lay the past to rest once and for all.

The town fathers of Amy Webber's new home need to wake up and smell the coffee. The town library is an original Carnegie library with serious-- and I mean serious-- roof issues. Since the building not only houses the library but the town's important documents dating back countless decades as well, many valuable items could be lost. I know-- just an average day in almost any library in this country, but since most of Amy's investigating consists of going through these old records, she's going to be out of a sleuthing job if something isn't done.

I like what author Victoria Gilbert did with the character of Richard Muir. Throughout the book, he is described with words like graceful and elegant, words that we usually don't associate with men. By book's end, readers know that this character not only knows how to move on the dance floor, he's also funny, brave, caring, and sexy. Not bad, eh?

Well... if you're a reader like me who doesn't really care for much romance in her mysteries, it can be. And that's what happened. Too much romance, not enough mystery. In fact, the mystery was rather easy to solve. Couple this with characters that I just didn't grow to care for and my reception to A Murder for the Books was luke-warm at best. However, if your pet peeves differ from mine, then your mileage will certainly vary.