The Vineyard Victims by Ellen Crosby 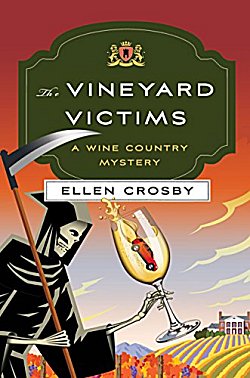 First Line: My mother warned me to stay away from bad boys even before I started dating, but she'd married one herself-- my father-- and, as they say, apples don't fall too far from the tree.

When a neighbor and former presidential candidate drives his SUV right into a stone pillar at the gates to her vineyard, Lucie Montgomery is convinced that the crash was deliberate, but everyone else is equally certain that Jamison Vaughn lost control of his vehicle on a rain-slick road. Vaughn may have had huge campaign debts, but what possible reason could he have for committing suicide...or was it murder?

In her insistence to carry out Vaughn's dying words to her, Lucie quickly uncovers a connection between the dead man, some of his old friends, and the thirty-year-old murder of a Ph.D. student. There is a man on death row for the crime, but Lucie believes he is innocent. However, her investigation into the two deaths soon involves someone from her own past. Now Lucie must confront some of her own demons while carrying out the last wishes of a dead man.

I first became aware of Ellen Crosby through her two Sophie Medina mysteries. I enjoyed them both so much that it didn't take me long to search out her Wine Country mysteries set in Virginia. Crosby writes such smart books; her stories have area history and culture woven lightly throughout the pages, and even though I'm a teetotaler, I appreciate learning about wine making.  Who knew?

Lucie is a strong main character whose life was forever changed by a tragic car accident. She has a weak leg and must walk with the aid of a cane, and this means that she relies on her intelligence to solve these mysteries, not in her belief that she's invincible. She also has strong opinions about things, and she may not always be right. The Vineyard Victims forces Lucie to confront circumstances surrounding the accident that crippled her-- an element that strengthens the already solid mystery surrounding Jamison Vaughn and what happened thirty years ago.

If you like intelligent writing and strong characters, you won't go wrong with Ellen Crosby's Wine Country series. And you don't even need a corkscrew.