The Death Factory by Greg Iles 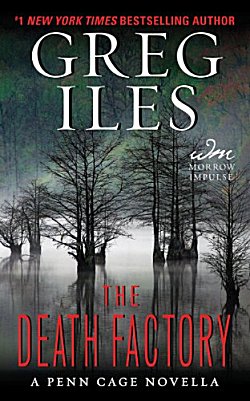 First Line: When you're told that your dying father has something important to say to you before he passes, two feelings flash through you: first, the sense that you're in an Alexandre Dumas novel, that some momentous family secret is about to be revealed-- the lost inheritance, your true paternity, something like that.

A heart attack sends Tom Cage to the emergency room and he insists that his son, Penn, be brought to his side to hear a dying declaration. But when Penn gets there, Tom denies ever having made the request. The whole thing sends Penn on a painful trip down Memory Lane when he was working in a Houston district attorney's office while caring for his dying wife. That DA's office was known as "the death factory" for sending more killers to death row than any other in America.

As Penn's wife lay dying, a tormented forensic technician comes to him for help. He brings evidence of a crime lab in chaos and begs Penn to prevent a gross miscarriage of justice. Now Penn has to fight the death factory with everything he's got-- both at home and on the job.

I don't think anyone could be a real crime fiction lover and not be aware of Greg Iles. Until now, that's all I was-- aware-- and since Iles tends to write quite weighty tomes, I decided to read this novella to see if I wanted to read more.

What I found was a well-told tale with lyrical descriptive passages and a main character I quickly grew to like. The storytelling flowed well, and the plot certainly kept my attention, especially with its emotional elements concerning Penn's father and wife. All my reactions were positive but for some strange reason, Penn didn't set my world on fire. As much as I liked him, I have no real burning desire to read more (although I may very well do so). This is a reaction I very seldom have so I'll have to ponder it a bit more. I may yet become a Penn Cage fan. Only time will tell.

A Penn Cage novella
Rating: B+
Source: Purchased from Amazon.