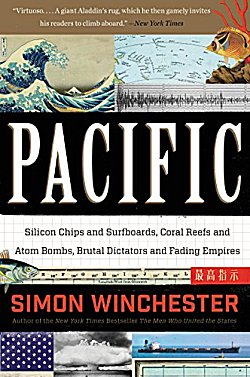 In his inimitable way, Simon Winchester sets out to prove the vast importance of the Pacific Ocean, not only in the past and present, but in our future. For the most part, he succeeds.

The size of the Pacific Ocean is immense and almost beyond our reckoning. It is the source of the world's weather and has survived atomic bombs, transistors, and the abysmal treatment of its native peoples. Winchester takes us on a mesmerizing journey from one end of the Pacific to the other, from east to west and north to south, with lots of stops on tiny islands and archipelagos along the way.

Winchester has been one of my favorite non-fiction writers since his unforgettable The Professor and the Madman: A Tale of Murder, Insanity, and the Making of the Oxford English Dictionary. He's opened my eyes to many things and encouraged me to read deeper into many of the subjects he brings to light. However, I have to admit that I am concerned about an error I found while reading this particular book. In it, Winchester talks about traveling up the Mississippi River past the city of Des Moines. I did some research in an attempt to discover if my memory had blown a fuse, but it hadn't. Des Moines is certainly not on the banks of the Mississippi River between Hannibal and St. Louis, Missouri, as stated in his book, and that's what has me concerned. If a simple yet glaring mistake like that can make its way to the final edition of the published book, how many other errors made it through, too? And if there are errors in this book, what about his others?  One city in the wrong place can cause so much harm.