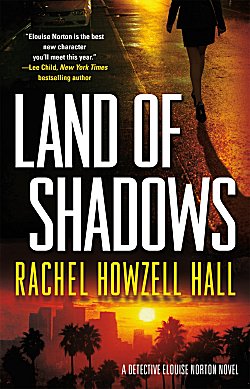 Los Angeles homicide detective Elouise "Lou" Norton has a new partner fresh from the Colorado Springs police department, and when they're called out to a death at a condominium construction site, Colin Taggert tells Lou that seventeen-year-old Monique Darson's death is a suicide, plain and simple. Lou thinks Monique's death is neither plain nor simple... nor a suicide.

The main reason why she thinks the young girl didn't commit suicide is that she was found inside a property owned by Napoleon Crase, a self-made millionaire and the man Lou is convinced killed her missing sister Tori thirty years ago. The people she works with on the force are well aware of how she feels about Crase, and her boss makes her work hard to prove that he is a viable suspect. And work Lou does. The more she works, the more she discovers that the death of Monique Darson and Lou's missing sister are linked-- so much so that she feels finding Monique's killer will finally bring her sister home. But getting closer to the truth also means that Lou is getting very very close to a violent killer.

The minute I began reading Land of Shadows, Lou Norton's voice pulled me right into the story. She's a black woman who grew up in a dangerous part of Los Angeles, and she worked hard to get out of there, get an education, and better herself. She and her husband have money, nice cars, a very nice home. Lou wants for no material possessions, yet she's right back in the 'hood working hard to put the bad guys behind bars. Lou may have gotten out, but she's determined to give back, to help those who couldn't get out.


Lou is definitely the star of this show, but I also liked her supporting cast. Her boss, Rodriguez, is a fair man who looks her right in the eye and tells her "I just want you to be as good as you can be." He knows how she feels about Napoleon Crase and makes her work twice as hard to prove everything she says about the millionaire. Her new partner, Colin Taggert, starts out as a bumbling newbie full of bogus ideas, and it was refreshing to see his gradual change. Hall's sense of humor shines brightest when Lou and Colin don't see eye-to-eye, although at times it may be humor more easily understood by women: "I climbed out of the car before he could explain. Didn't he hear me? I was in no mood to kiss boo-boos and hand out juice boxes. There were worse things in life than being sent from a living room."

The investigation in Land of Shadows is filled with twists, turns, and surprises, and I certainly wasn't expecting the identity of whodunnit. With Rachel Howzell Hall's skill at storytelling and creating characters, I know I'm going to be visiting Lou Norton's part of Los Angeles regularly.