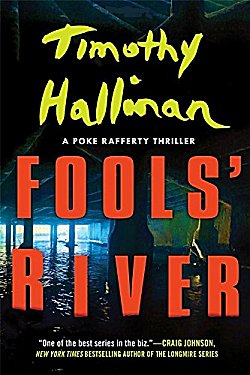 First Line: The blinds are drawn the way they've been drawn forever, with the inside edges of the slats tilted upward to block his view of the sky and the fall of sunlight through the window, which means he has no idea what time it is.

You can almost take it to the bank. During a time when all you want to do is stay close to home with your pregnant wife, someone will come to you with an emergency. That's what has happened to Poke Rafferty. Edward Dell, the almost-boyfriend of Poke's teenage daughter Miaow, needs help. His father has disappeared. Buddy Dell is a late-middle-aged womanizer who moved to Bangkok for its sex trade, and when his son is asked if Buddy couldn't just be off on one of his benders, Edward says no. This disappearance follows none of the patterns of his father's other jaunts... and money is being siphoned out of his bank and credit card accounts.

When Poke begins to investigate, he quickly learns that Buddy has been captured by killers who prey on Bangkok's "sexpats," and when his money is gone, he'll be found dead in a canal-- like at least a dozen other men. Poke estimates that he's got two days to find Buddy before the man's money runs out.

Hallinan's Poke Rafferty series brings readers right into the heart of Bangkok to make them think and to make them feel. In this eighth book in the series, Hallinan tries some new things to tell his story of the effects of Bangkok's world-famous sex trade. Fools' River is told from several different points of view, and the action takes place within a two-day time frame. The limited time frame ratchets up the tension, and the multiple points of view bring depth and clarity to the story.

Through the narrative, readers come to know one of the murderers which adds a level of ambivalence. Normally killers do not rate mixed feelings in crime fiction, but one of Hallinan's aims in his writing has always seemed to be helping readers understand humans' complex emotions and behaviors. It's something he does extremely well. Fools' River not only has an exciting story to tell, it also shares insights into Poke's wife Rose and a new character, Lutanh, whom I really grew to care for.

This Poke Rafferty series is perfect for readers who enjoy strong storytelling, a strong sense of place, and moral complexity. Poke's world is not black and white; it is filled with shades of gray-- and the stories are all the stronger and more brilliantly colored for it. I'd no more forget to read a new Poke Rafferty mystery than I'd forget to put on my glasses first thing in the morning.