My Sister's Grave by Robert Dugoni 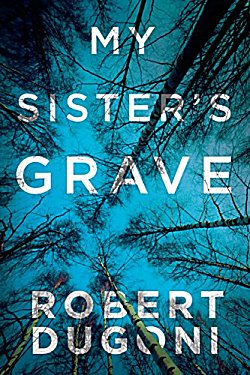 First Line: Her tactical instructor at the police academy had liked taunting them during early morning drills.

Contrary to popular opinion, Tracy Crosswhite does not believe that Edmund House, a convicted rapist and the man sent to prison for her sister Sarah's murder, is guilty of the crime. This case has haunted her for twenty years, so much so that she left her job as a high school chemistry teacher to become a homicide detective with the Seattle Police Department.

When Sarah's remains are finally found near their home in northern Washington, Tracy is determined to get the answers she's been searching for all these years. As she hunts for the real killer, she keeps unearthing long-buried secrets that change her relationship to her past... and put her in very real danger.

After watching a video of one of Dugoni's author events, I knew I had to read one of his books, so I downloaded My Sister's Grave. I'm glad I did because Dugoni's fast-moving story kept me riveted from first page to last. One of the things I liked most was the author's decision to let readers know very early on that there is some sort of conspiracy surrounding Sarah's death. This really ups the suspense and keeps readers wondering how many people are involved, their identities, how much they can be trusted (if at all)-- and just what exactly that they're covering up.

There were a couple of things that I didn't particularly care for: a romance for Tracy that wasn't really necessary, and all the drama coming to a head in the middle of a snowpocalypse, but these were minor annoyances that really didn't prevent me from turning the pages as fast as I could go.

Dugoni's characters come very, very close to stealing the show from his story. These people are not cardboard cutouts, even the murder victim whose light is just a brief shooting star in the night sky. Tracy can be admired for her dogged determination to find the truth and to demand justice, but how is she going to handle herself if any of her theories are wrong? Almost every single character is shown to have multiple facets, and that gives so much depth and power to a story.

Now that Tracy has finally solved her sister's murder, I'm looking forward to continuing this series. I have to know what's next for such an intelligent, stubborn woman.