They Saw the Elephant: Women in the California Gold Rush by JoAnn Levy 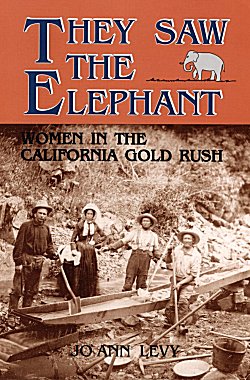 For the 49ers who feverishly crossed land and sea to make their way to the California gold fields, "seeing the elephant" symbolized the exotic, the mythical, the once-in-a-lifetime adventure. In They Saw the Elephant, JoAnn Levy tells us about the women who made this incredible journey.

When Levy first began to do research, some numbers just didn't add up. Men who wrote about the California Gold Rush of 1849 were quick to say that those racing to the gold fields were almost all exclusively male, but statistics and the historical record do not bear that out. Levy kept looking, thinking that someone, somewhere, had to have written a history of the women of the Gold Rush, and although she found books about Australians, Chileans, blacks, Irish, French, and other national and ethnic groups represented among the 49ers, there was not a single book about the women.

In They Saw the Elephant, Levy tells us how the women traveled to California, what they did when they got there, and for several of them, their stories are told all the way to the ends of their lives. I have read a few books about women in the Old West (including the period and setting of the Gold Rush), and I'm happy to say that Levy doesn't travel over old ground; Lotta Crabtree and Lola Montez are the only "repeats" in the long and varied list of women she tells readers about. That was much appreciated.

I am fortunate to live in a time when so many women's stories are finally being told. Many of the female 49ers were every bit as strong, inventive, and colorful as their male counterparts, and thanks to JoAnn Levy, I now know more about them and will continue to learn with the bibliography she provides in her book.