The Fifth Petal by Brunonia Barry 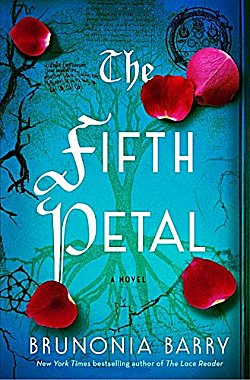 First Line: Isn't it a little late for praying? Tom Dayle thought but did not say.

When a teenage boy dies under suspicious circumstances on Halloween night, the first thing that crosses Chief John Rafferty's mind is the triple homicide in 1989 that paralyzed the town of Salem, Massachusetts. Still unsolved and called "the Goddess Murders," the case concerned the murders on Halloween night of three young women who were all descendants of accused Salem witches.

What Chief of Police Rafferty doesn't expect is help from Callie Cahill, the daughter of one of the three victims who's just returned to town. Neither John nor Callie believe that the main suspect, Rose Whelan, is guilty of murder or witchcraft, but proving her innocence is going to be extremely difficult.

Barry's setting of Salem, Massachusetts is absolute perfection. She brings the city and its history to life, and she makes me want to board a plane and go there immediately for at least a month so that I can explore everything.

The cold case involving the three murdered women is also fascinating. There were two witnesses to the murders, but one suffered a psychotic break from which she never recovered, and the second witness's memories are as the five-year-old girl she was at the time. This makes any information they give Rafferty difficult to interpret, and of course, the chief has to deal with a town that's ready to conduct another witch hunt.

There are several brilliant elements to this story, but I found it to be in dire need of an editor. "Too much middle" means that the pace slowed down to a crawl several times, and I began to find myself losing interest or wanting to skim. Not good. However, the good does far outweigh the bad, and Barry's mystery lingers in my mind still.