The Countess of Prague by Stephen Weeks 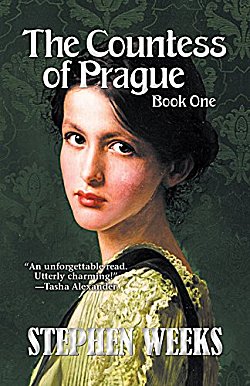 First Line: It was in late February, when the melting mountain snows had swollen the banks of the Vltava.

It's 1904, and in the city of Prague there happens to be a rather bored young aristocrat-- the Countess Beatrice von Falklenburg. Her polite but impoverished marriage has become devoid of love, and even flirting with handsome men and sending them meaningless little love notes has lost its allure.

When the body of an old man who used to be under the command of her military uncle is fished from the river, she takes to the role of detective with relish-- trying on disguises, calling herself Trixie, and going undercover on a train journey to Paris and London. Her very first investigation eventually finds her in the spa town of Marienbad, where Edward VII of England and his nephew Kaiser Wilhelm are scheduled to meet.

This is the first in a ten-book series of the Countess Beatrice von Falklenburg's adventures which will take her from 1904 to 1914 when World War I breaks out and changes the world she knows forever. The Countess of Prague gives readers an excellent flavor of the times, but it got off to a shaky start-- mainly due to Trixie herself.

I had to remind myself several times that this book relates the beginning of Trixie's life as a spy/detective because her upper-class snobbery and some of her hare-brained stunts exasperated me greatly. (The stunts mainly because they showed a lack of common sense, but then--as I kept reminding myself-- she's led a sheltered life.)

I also found the plot to be overly convoluted, to the point where I began to lose interest, but the redeeming features saved the day. What redeeming features? The humor, for one, made me smile. The second redeeming feature was the secondary cast, in particular her servants, Müller and Sabine. This is where actually working with those two and seeing them as human beings rather than pieces of furniture makes Trixie begin to change for the better. The servants' willingness to work with her on her clandestine mission shows more than just employee obedience, too.

Once the countess began to grow into her chosen role of spy and detective, the reading became much more enjoyable, and I do look forward to her next adventure.