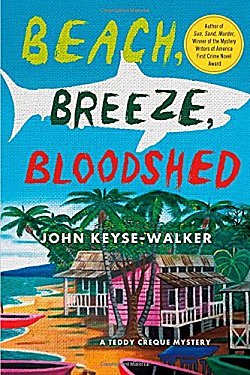 First Line: Violent death is part of a policeman's job-- witnessing it, dealing with its aftermath, informing the next of kin, capturing the perpetrators, and sometimes even avoiding having it visited upon one's self.

He may have been awarded the Queen's Police Medal for his bravery in solving the crime in Sun, Sand, Murder, but Constable Teddy Creque is still recuperating from the physical and mental wounds he received as a result of that investigation. But a promotion and a medal can be great incentives, so when a woman is killed in a shark attack off the coast of a neighboring island, Teddy is happy to answer Deputy Commissioner Howard Lane's call.

He was supposed to capture and kill the man-eating shark, but he quickly begins to suspect that the woman's death was far from accidental. Still new to everything that a murder investigation entails, Teddy has to become creative in his pursuit of justice. His only witness is a silent child who communicates in unorthodox ways, and he must also gain the trust of islanders who have learned to be reserved in order to deal with tourists. Sooner or later, all this gathering of clues and facts is going to put the British Virgin Islands' newest constable right in the path of a killer.

It is rather sobering to write this review in the days following Hurricane Irma's destruction of the two islands-- Anegada and Virgin Gorda-- that figure so prominently in Beach, Breeze, Bloodshed. John Keyse-Walker writes eloquently of island life and culture. It's so easy to visualize the scenes that take place on the islands or out on the water and diving on the coral reefs.

Teddy Creque has done a lot of growing since the first book in the series, both mentally and emotionally. He's learned quite a bit about what being a good police officer entails, and he's very aware that his education has just begun. He has a natural aptitude for investigation, and he's even improved his skills in working with his superior officers. This character growth really impressed me, and certainly makes me eager for more books in the series.

The mystery in Beach, Breeze, Bloodshed features some excellent misdirection, exciting action sequences, and a romantic interest for Teddy that no-romance-in-my-books me didn't turn my nose up at. Bring on the next book; I'm ready for another trip to the Caribbean!