A High Mortality of Doves by Kate Ellis 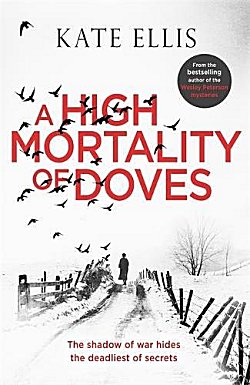 It's 1919, and the Derbyshire village of Wenfield is still reeling from four long, terrible years of war. Villagers have yet to come to terms with the loss of so many of their young men, and now a young girl has been brutally murdered, her mouth slit and a dead dove stuffed inside.

When two more women are found murdered in identical circumstances, Inspector Albert Lincoln is sent from London to investigate. Lincoln is fighting his own private battles: his war injuries, the death of his young son, and a wife grown cold and distant. The area is thrown into a panic with a killer on the loose, and Inspector Lincoln has his hands full with suspects whom he finds to have hidden lives and secrets.

In A High Mortality of Doves, author Kate Ellis has given us a marvelous evocation of time and place. Readers can see and feel how World War I affected Inspector Lincoln, his family, and all the villagers in Wenfield.

The story is told by two people: Flora Winsmore, the local doctor's daughter, who yearns for freedom from her oppressive life, and Albert Lincoln, the Scotland Yard inspector who's filled with his own demons. There is much sympathy to be had for both characters as the story unfolds.

The mystery hinges on brilliant misdirection which will not please some readers, and although I wasn't completely satisfied with the outcome, I didn't find it off-putting. What did bother me was the fact that the book had "too much middle," and the pace bogged down significantly. Some judicious editing would have tightened up the story and made reaching that shocking reveal much less like work.