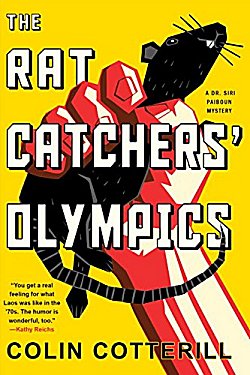 First Line: There were occasional relaxed periods of what the Lao called sabai.

It's 1980. Half the world is boycotting the Moscow Summer Olympics to protest the Soviet Union's invasion of Afghanistan, but that has made room for athletes from other countries that are usually too small or too poor to be competitive-- like Laos. Laos is thrilled to be competing in its first-ever Olympics, and Dr. Siri Paiboun and his wife Madame Daeng would love to visit Moscow. To that end, Dr. Siri does a little finagling and has the two of them named medical advisors to the Laotian Olympic team.

Once in the Olympic Village, Siri begins to suspect that one of the athletes on the team is not who he says he is, so a little investigation is called for. Fearing some sort of conspiracy, Siri and his friends liaise in secret with Inspector Phosy back home in Vientiane to see if the suspect is an assassin, but everything is derailed when one of the Laotian athletes is accused of murder. Dr. Siri is right in the middle of an international incident with not one but two paranoid governments to navigate around to ensure justice is done.

Colin Cotterill's book titles always catch the eye and the imagination, and The Rat Catchers' Olympics is no exception. Many times there are double meanings to these titles as there is here, with both two- and four-legged rats that need to be caught. No matter where you live, elderly Dr. Siri and his wife Madame Daeng are good people who know how to get so much enjoyment out of life even though they have very little in the way of material goods. Take for example Siri's skill in wrangling free vacations to interesting places. No one's better at it, and readers are always guaranteed an adventure when he reaches his destination.

I love Cotterill's gentle sense of humor that can be turned toward anyone or anything, and his cast of characters is one of the best in crime fiction. Everyone has a role in solving this excellent mystery. Between many of the characters' advanced ages and the paranoia of the Communist governments involved, these characters may not move quite like a well-oiled machine, but they get the job done, they get it done right, and they do it with a smile. You can't ask for better.  I have said that the mystery is excellent, and it is. My radar must have been in fine working order when I read this because I did figure out whodunit, but Cotterill is so wily that he kept me worried. Was I right, or did I fall for a red herring? I like that.

The sense of place is marvelous in The Rat Catchers' Olympics; I really did feel as though I was walking through the Olympic Village and attending events along with the cast of characters. The best part about it is that the Laotian athletes-- many of whom are young people from tiny villages who've never worn running shoes-- remind readers of what the Olympics are really all about.

This is a book to be enjoyed from first page to last. If you haven't experienced a Dr. Siri mystery before, I hope you'll give one a try. This series is really something special.