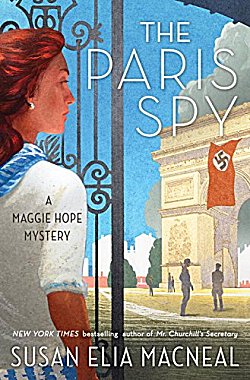 First Line: Only a single small sparrow, hiding in the high branches of the green chestnut trees, dared to pierce the Avenue Foch's eerie silence with her chirps and trills.

Being dressed in Chanel and staying in a chic hotel in German-occupied Paris is a long way from Maggie Hope's beginnings as Winston Churchill's secretary, but she's on two missions: one, to find her half sister Elise who disappeared after escaping from a concentration camp. Two, to find the whereabouts of captured agent Erica Calvert's research, which is vital for planning the Allied invasion of France. These objectives are going to take all of Maggie's talents for deception and spycraft because England's Special Operations Executive has a traitor who is endangering every one of their agents.

I've been a fan of Susan Elia MacNeal's World War II-era Maggie Hope series since the first, Mr. Churchill's Secretary-- and it's almost impossible to believe that was seven "installments" ago! In each book, Maggie has grown from a woman with a talent for mathematics and thinking on her feet to an agent who not only trains new recruits but does dangerous undercover work herself. The entire series is a homage to the incredible sacrifices that so many (sometimes nameless) people made in the name of freedom during World War II. In MacNeal's capable hands, this series is both enlightening and highly entertaining.

I'm also happy to say that in The Paris Spy, everything comes together with a sizzle; it's MacNeal's best book yet. Occupied Paris comes to life in all its swastika-drenched angst, and the excellent pacing just never lets up. There are some surprising characters who do not behave as one would expect, and there is danger from so many different angles that it's almost impossible to see how on earth Maggie can pull everything together. It's not all derring-do and razzmatazz in The Paris Spy, however. Bad things happen to good people and the things that agents must do change them both inside and out.

This is a perfect book-- and a perfect series-- for fans of historical mysteries featuring strong female characters. (Think Bess Crawford or Maisie Dobbs.) But... if you ever find yourself with a code to crack or the Gestapo closing in, put your money on Maggie. She'll get the job done.