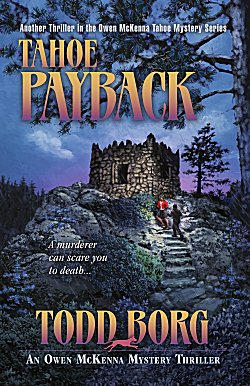 First Line: The person with the gun said," Get out of the boat."

When told that a man's girlfriend has disappeared, private detective Owen McKenna wonders if she got cold feet and ran away. After all, the man spouts poetry, is very awkward both physically and emotionally, and he dresses funny. When the woman turns up dead on Fannette Island out in Lake Tahoe, McKenna learns that she had a scam charity that stole millions of dollars from the donors. When two more victims are found, the private detective suspects that they ran phony charities, too.

While he's out investigating, his girlfriend Street Casey has reason to believe that her ex-con father who's jumped parole will show up at any time to exact revenge for her testimony that put him in prison.

Torn between finding a vigilante killer and wanting to protect Street from a very real danger, Owen McKenna has his hands full.

I love summer, and one of the things about the season that makes me smile is the fact that there will be a new Owen McKenna mystery to read. McKenna is a retired San Francisco homicide detective who doesn't own a gun. He enjoys art, loves the breathtakingly gorgeous area called Lake Tahoe, has a wonder dog named Spot, and is willing to love and accept his girlfriend, Street, on her own terms. The fact that he's fantastic at catching bad guys is just icing on the cake.

If you love dogs, you're going to love Spot the harlequin Great Dane. The bond between Spot and Owen is unbreakable, and although I called him a wonder dog, Spot is just a dog-- a dog who's been cared for and trained by a man who isn't really complete without him. McKenna's close observation of his constant companion means that Spot is not only excellent company and a fine guard dog, he could double as a therapy dog or a tracking dog. I could be facetious and say that he could probably deliver the mail or be governor, too, but that wouldn't be right. Spot is never portrayed as anything other than a well-trained dog with loads of personality. That's what makes him such a wonderful character.

Borg always shares a bit of Tahoe history with readers as well as the beauty that can be found all around, but the story is always important in an Owen McKenna mystery. This time Borg takes a very large shovel and digs up the unsavory facts about charities. Charities rake in a cool $1 billion per day. (No, that's not a typo.) So many legal loopholes exist that the unscrupulous think nothing of forming phony charities to fleece unsuspecting people who only want their hard-earned dollars to do good. There's not even any real watch dog agency to winnow out these fakes.  The author takes these facts and builds them into a story that will fill readers with dismay-- and anger. However, readers will also find common sense tips on how to choose charities wisely.

If there's any weakness at all in Tahoe Payback, it's that the story was a bit top heavy with charity information at the expense of Street's being stalked by her (very scary) father. I usually rave about Owen and Spot and neglect to say much about Street, but I love her, too. She's strong and smart and knows what is best for her own well being (as well as Owen's and Spot's). She's also full of common sense, taking appropriate measures when she learns that Daddy Dearest has jumped parole. Owen wouldn't be quite the man he is without her. Theirs is one of my favorite fictional relationships.

I loved Tahoe Payback. Once again, this talented writer has given readers a fast-paced, absorbing, and memorable story. When I have a new Owen McKenna mystery in my hands, I always want to start reading and not stop until I've turned the last page. This is one of my favorite series, and I highly recommend it to all of you.