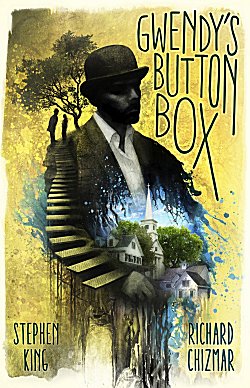 First Line: There are three ways up to Castle View from the town of Castle Rock: Route 117, Pleasant Road, and the Suicide Stairs.

Twelve-year-old Gwendy is on a mission to lose weight. That's why she takes the Suicide Stairs up to Castle View every single summer day of 1974. One day while she's at the top catching her breath, a stranger calls out to her. This is how she meets Richard Farris, a man in black jeans, a black suit coat, a black hat, and a white shirt unbuttoned at the collar. Farris has been watching Gwendy, and he has an offer for her that she can't refuse.

Readers quickly see that although Gwendy is young, she's not stupid, and for the next ten years of her life, we are able to observe how this young woman deals with being in possession of something that bestows great gifts, great temptations, and great responsibilities.

The collaboration between Stephen King and Richard Chizmar is seamless. Not only do we get another chapter in the saga of Castle Rock, Maine, we're given another unforgettable character in Gwendy. This cautionary tale never loses its momentum and was a pleasure to read from first page to last. If only it were longer!