Give Up the Ghost by Juliet Blackwell 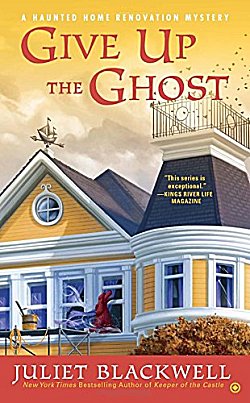 First Line: It's hard to ruin a Pacific Heights mansion.

Andrew Flynt is a San Francisco millionaire who's used to getting his own way. He wants to sell the Victorian mansion he so lovingly renovated, but ghostly happenings keep scaring off potential buyers. Flynt even calls in a famous psychic who tells him that his multi-million dollar "updates" have left the resident ghost extremely angry. Cue contractor Mel Turner.

Charged with restoring several of the original features to placate the ghost and facilitate a sale, Mel starts tracking down the items she and her crew are going to need. But when the psychic is found stabbed to death, Mel knows it's going to be another case of double duty: finding out the secrets of the old house known as Crosswinds... and working to catch a killer.

I have come to depend on Juliet Blackwell's Haunted Home Renovations series for light, fun reads that deliver my fix of wonderful old houses. Blackwell always handles the paranormal aspects of these books with a light, sensitive touch that I appreciate.

In Give Up the Ghost, the story behind the ghosts and the ghosts' lives are fascinating, and the entire story moved along at a quick, steady pace. But what flabbergasted me was what Flynt did to that poor house. Why on earth someone who prefers glass, chrome, and black leather would buy an old Victorian mansion and then insist on forcing it to conform to his taste is beyond me, but I know that it happens. To say that Mel's work to undo the damage was every bit as interesting as the mystery... well... it actually plays an important part in the mystery!

If you're in the mood for a light, intriguing mystery about a house with hidden rooms, secret doors and passageways, and a few things that may go bump in the night, I think it's time to acquaint yourself with Juliet Blackwell's Haunted Home Renovations series. They can be just what the doctor ordered.