The Dance of the Seagull by Andrea Camilleri 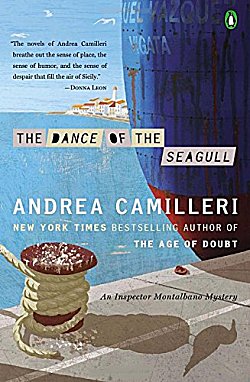 First Line: At about five-thirty in the morning, he could no longer stand lying in bed with his eyes wide open, staring at the ceiling.

Inspector Salvo Montalbano is just about to leave on vacation with Livia when he comes to a halt, transfixed by something he sees on the beach. A seagull is doing an odd dance on the sand...and then it falls over dead. Puzzled by what he's seen, Montalbano stops by the police station to check on things before leaving. He discovers that Fazio is nowhere to be found and was last seen on the docks, secretly working on a case. Montalbano's first priority now becomes finding Fazio, little knowing that he will soon uncover a hidden world of sadism, extortion, and murder.

When I began reading The Dance of the Seagull and learned that Montalbano was going on vacation with Livia, I groaned out loud. I'm not a fan of Livia; it seems that all she and the inspector can do when they're together is misunderstand each other and fight. I'd much rather deal with clues and dead bodies. But as soon as Montalbano steps foot inside the station and learns about Fazio, we are immediately immersed in an investigation.

Montalbano, the old grouch, seldom gets the sleep he needs, but now he seems to be getting flashes of "second sight" along with his insomnia. I love to watch this character put together completely disparate occurrences to form kernels of knowledge that tell him what's happened. All homicide detectives should be so lucky. He's also fortunate in the team he's brought together, and The Dance of the Seagull shows us exactly what each member is willing to do for the others. These men aren't simply co-workers who put their lives on the line; they are also friends, and-- most importantly-- family.

No Montalbano mystery is complete without a scene starring fan favorite Catarella and a few more showcasing the mouthwatering food of Sicily. This entire series is a gem, and one of the best pieces of translation I've come across in my reading. I've been with this series since the beginning (The Shape of Water), and the cast of characters, the setting, and the mysteries have me completely hooked. I'm not about to miss a single installment, and if you give the series a try, you'll probably find yourself feeling the same way.

The Dance of the Seagull by Andrea Camilleri
Translated from the Italian by Stephen Sartarelli
ISBN: 9780143122616
Penguin Books © 2013
Paperback, 277 pages