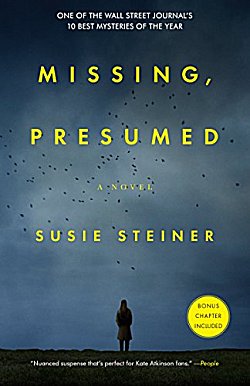 First Line: She can feel hope ebbing, like the Christmas lights on fade in Pound Saver.

Manon Bradshaw may love her job, and she may be a highly respected member of the Cambridgeshire police force, but she's thirty-nine and what she wants most is a personal life. She wants a husband and children and goes out on internet dates trying to find Mr. Right. Then-- once again-- her search for love takes a backseat to her job when she finds herself involved in a very puzzling crime.

Edith Hind is a graduate student at Cambridge University and the daughter of very well-connected parents. She's also been missing for almost twenty-four hours. Few clues have been left behind in her home: drops of blood, her keys and phone left behind, the front door ajar with no signs of forced entry. Manon knows this case is going to be huge-- and that every second is crucial to finding Edith alive.

Missing, Presumed is told in the voices of principal characters in alternating chapters: Manon; her partner in the police force, Davy; Edith's friend Helena; Edith's mother Miriam; and one or two chapters from Edith herself. It's a good way to get inside the minds of each character in order to get a clearer picture of what's going on. This is especially true once the investigation gathers steam and the lives of the people closest to Edith are put under the microscope (and often shredded).

The one character I had the most difficult time coming to grips with is Manon Bradshaw herself. This is because, for most of the book, she is ruled by jealousy. She's not close to her family because her sibling got more attention. She looks at every other female and sees what they have that she doesn't. It's never dawned on her that maybe, just maybe, what everyone else has isn't what she needs. Seeing her finally begin to change her way of thinking was refreshing to say the least.

Although the pace of the book is dramatically slowed by what I refer to as TMM (too much middle), and it has an ending that I didn't find very surprising, I still enjoyed the book. Those alternating voices really pulled me into the story. My next encounter with Manon will be an interesting one.