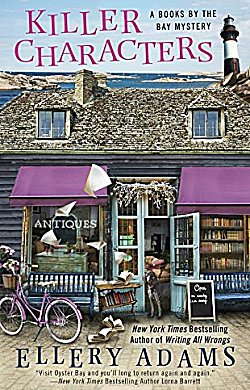 First Line: "All I think about is death," said Laurel Hobbs to her friend and fellow Bayside Book Writer Olivia Limoges.

Olivia Limoges may be enjoying her new marriage, but her friend Laurel Hobbs certainly isn't enjoying her own. Laurel is struggling with a demanding job, lively twin boys, a terminally ill mother-in-law, and a husband who's mostly absent-- and when he deigns to be present, he's whiny and argumentative. Catching Steve with her mother-in-law's nurse? Laurel can't take any more.

When the nurse is found dead, Olivia's husband, Chief Rawlings, has no choice but to take Laurel into custody. The Bayside Book Writers are now a group divided, and Olivia has to work fast to prove Laurel's innocence.

Ellery Adams' Books by the Bay cozy series has been a favorite of mine since its inception. The ensemble cast, the coastal North Carolina setting with its rich history, mouthwatering food, and some fine mysteries to solve have made these books something very special. When I came to the end of Killer Characters, I knew without heading to Amazon to read reviews that many readers would be outraged. If you haven't read this last book in the series and you'd like to leave the characters surrounded by a sort of fairy tale glow, you may want to give this one a miss.

Fortunately I'm an easy-going reader because I can wait patiently for the next book in a series, and I don't send authors hate mail if they don't write the way I want them to. Frankly, I want them to write the way they want to. If my favorite authors are happy, they're going to write longer. Ellery Adams chose to end her wonderful series, not as a fairy tale, but as a story showing the growth and resilience of the main character, Olivia Limoges. People grow... people endure... by experiencing both good and bad. When this series began, Olivia was an ice queen, emotionally closed off, and watching everyone from a distance. By series end, she's made and kept, protected and taken care of, her dear friends. When I closed Killer Characters, I may have had tears in my eyes, but my heart was full. I knew Olivia and the other folks she cares about in Oyster Bay were going to be all right.

Now... I've been talking about this as though it's a character study only, but there's an excellent mystery to be found here, too-- one that I didn't have solved beforehand-- and that's another thing I've loved about this series. If you haven't read a Books by the Bay mystery, dive right in with the first one, A Killer Plot. These characters grow and change, and you don't want to miss a bit of it.

And might I just say-- Well done, Ellery Adams! I admire your bravery in ending the series the way you wanted to end it. Olivia deserved no less.