Gone With the Wool by Betty Hechtman 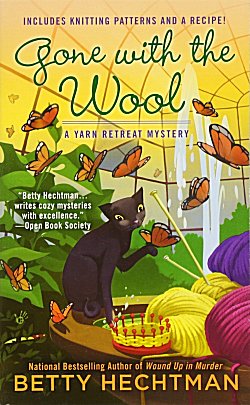 First Line: Why hadn't I realized this problem before?

Every October, Cadbury by the Sea has a festival to celebrate the return of thousands of monarch butterflies to their winter homes on the Monterrey Peninsula. Casey Feldstein has her hands full setting up a yarn retreat, doing her nightly baking for local businesses, and helping out at the festival. But when a former butterfly queen is found dead, Casey has to add one more thing to her to-do list: finding a killer with a score to settle.

Fellow fans of this series will like knowing that a secret from the previous book is dealt with here in Gone With the Wool, and the reaction Casey gets isn't exactly what she expected. How's the mystery? First rate, because Hechtman's red herrings led me in the opposite direction from the villain-- a bit like Julius the cat's "stink fish" would make me head away from the kitchen pronto.

If there's any weakness in this book for me, it's the fact that Casey spent 97% of her time sleuthing and dodging irritating parents. You see, her friend Sammy's parents are in town, and they still think Casey is going to marry their darling boy. (Definitely not happening.)

The reason that Casey had so much time to play detective is that her "early bird" friends who attend each of her yarn retreats are now so well-trained that they can do the work themselves. (You're not paying them, Casey, shame on you.) One of the reasons why I enjoy this series so much is that I love the participation in the retreats and the interaction with all the crafters. For me, yarn is as big an addiction as reading, so I need my fiber fix as much as my mystery fix.

If you're in the mood for a book (and a series) with a strong cast of characters, a good setting, intriguing mysteries, and a few balls of yarn thrown in for good measure, I suggest you sign up for one of Betty Hechtman's Yarn Retreats.