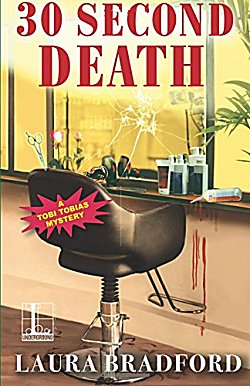 Against her better judgment, Tobi Tobias hires a problem actress for a commercial in order to help out her good friend, Carter McDade. When the egomaniacal diva drops dead mid-filming, the only suspect the police are looking at is Carter. Tobi definitely has to work fast in order to save her friend.

Laura Bradford has created an enjoyable cozy series that gives readers a peek inside the workings of a new and growing advertising agency. Another delight is the mystery itself. Early on I placed a bet with myself as to the identity of the killer, and nothing really made my antennae twitch enough to change my mind. I should have because I lost my bet. I love it when that happens!

I really enjoy the cast of characters in this series. Tobi is intelligent, funny, and a genuinely caring person. Her Grandpa Stu is her emotional rock, and it's really going to be interesting to see how Tobi adapts to the growing relationship he has with Ms. Rapple, the neighbor Tobi loves to hate. She has a huge blind spot when it comes to the woman, so what's it going to be, Tobi? Your happiness... or your grandfather's? I definitely want to see what's going to happen with this!

Tobi's friend, Mary Fran Wazoli, gets a larger share of the spotlight in this book, and so does Mary Fran's teenage son, Sam. Sam is a talented photographer who works on Tobi's ad campaigns. He's also a good listener and comes up with some wonderful insights, and if I have anything against this young man it's that he's almost too good to be true.

I only had two small quibbles in reading 30 Second Death. One was the fact that romance took control of the action a time or two and I've never made a secret of the fact that I don't care much for romance in my mysteries, especially when it's all about the old flame being back in town.

The second thing that bothered me also bothered me in the first book, Death in Advertising. I'm going to have to re-read that first book to see if any mention is made of Tobi hating her first name. Why? Because there is nickname overload. In Death in Advertising, Grandpa Stu called Tobi "Sugar Lump" so often that I found myself grinding my teeth. In 30 Second Death, Carter calls her "Sunshine" almost every other sentence. (Or it seems that way.) I was dreading the time when both Carter and Grandpa Stu would be in the same room with Tobi. Even Sam chimes in with his "Tobes." I know all this nickname calling must have some deeper meaning, but it escapes me. Isn't it odd the things that bother a person when she's reading?

Small irritations or not, I do enjoy this series: a good setting in the world of advertising; a great cast of characters (including a parrot with a mind of its own), and first-rate mysteries to solve. I'm looking forward to the third book.