The Irish Inheritance by M.J. Lee 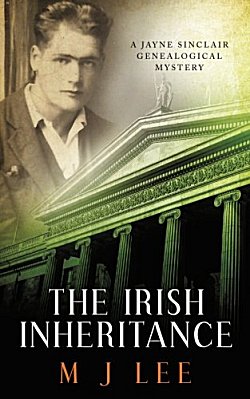 First Line: From a distance, it looked like a jaunt into the countryside for a picnic.

Former police detective Jayne Sinclair is now a genealogical investigator. She's been hired by an adopted American billionaire to discover the identity of his real father. She has only three clues to help her: a photocopied birth certificate, a stolen book, and an old photograph.

Once she begins investigating, it's obvious that someone else is looking for the same information-- someone who will stop at nothing to keep Jayne from finding it first.

The Irish Inheritance deals with two timelines. One during the time of the Easter Rising and the Irish War of Independence and the second in 2015 with Jayne's investigation. I'm always on the hunt for genealogical crime fiction since so many mysteries deal with long-buried secrets anyway. This first Jayne Sinclair mystery intrigued me for two reasons: one, that the genealogical investigator was a woman, and two, she is a former police detective. I thought this would make a change from the other similar series I've read where the main characters were all amateurs and male.

It did make a difference. Jayne may be saddled with a self-absorbed jerk of a husband, but her years on the police force certainly help her in knowing how to conduct investigations and interviews. Any attempts to intimidate her merely make her angry, and she also knows how to protect herself, which certainly comes in handy in this book.

One thing that amazed me (and shouldn't have) was when someone in the present-day timeline remarked, "There was fighting in Ireland?" Not everyone lived through all the IRA bombings in England, and few people seem interested in learning about their own history, which is why we keep repeating the same mistakes over and over. But to get back to The Irish Inheritance, although the identity of the person trying to hamper Jayne's investigation was rather obvious to me, I enjoyed the book a great deal. I liked Jayne, and her investigation was a fast-paced and intriguing one. I'll definitely be reading the next book in the series.