The Hammett Hex by Victoria Abbott 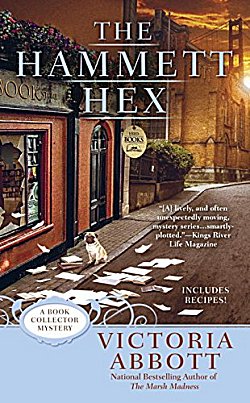 First Line: Squished into a cable car, hurtling down a steep hill, clinging to a rail with the wind rushing in your ears amid the clang and clatter of metal and the shrieks of fellow passengers might not be everybody's idea of a romantic moment, but strangely, it was working for me.

It wasn't easy but Jordan Bingham managed to score a romantic getaway to San Francisco with her main squeeze...as long as she picks up a primo copy of a Dashiell Hammett mystery for her curmudgeonly boss. Jordan's main man just so happens to be a Hammett fan, and besides visiting his estranged grandmother, he intends to see the Hammett highlights. But things start going downhill fast. After two attempts on their lives, it's clear someone's after them-- but who...and why?

In a mystery filled with lovely San Francisco ambiance (especially if you love climbing hills), the writing team known as Victoria Abbott has hit another one out of the ballpark. Besides that setting, there's plenty of tongue-in-cheek humor, narrow escapes, and an excellent whodunit that takes time for readers to put all the pieces in the proper places. The bonus is-- like with the other books in the series-- The Hammett Hex is brushed with a bit of fairy dust reminiscent of the crime fiction great mentioned in the title. (We've already been graced with Agatha Christie, Dorothy Sayers, Rex Stout, and Ngaio Marsh.)

One thing that I particularly enjoyed, although other readers might not, is the absence of some of the secondary characters. Don't get me wrong, Vera Van Alst, Signora Panetone, and Jordan's Kelly relatives are wonderful characters, but they can be overwhelming and have the tendency to elbow their way into the action. It was nice to see how Jordan can handle herself without her usual backup, and now that I've had a little break from curmudgeons, cooks who specialize in ambrosia, and crooks with hearts of gold, I'm raring to see them again.

Quite simply, I love Victoria Abbott's Book Collector mysteries with a passion, and if the series ever ends, I will pout so hard that I'll trip over my lower lip. Haven't met Jordan and the gang? You have to do something about that, quick!